6 Diseases That Could Mimic Ankylosing Spondylitis — and Delay Your Diagnosis

Ankylosing spondylitis, a type of axial spondyloarthritis, can be tricky to diagnose. These other diseases can present similarly to AS and cause a misdiagnosis. 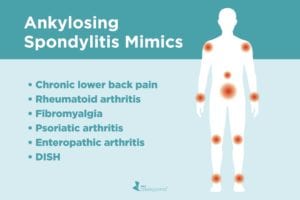 When Kristin Cornelius was hooking up the washer and dryer in her new house, she noticed an “insanely” bad pain in her thumb. “I figured I had stubbed it on a box or something,” she shared in a personal story. But the pain in her thumb joint only got worse, and over the next few days, she felt similar symptoms in her finger joints, ankle joints, and Achilles tendon.

At 37 years old, Cornelius had been combatting back pain for years. She had been taking “fistfuls of NSAIDs,” which she recently stopped because of stomach issues. But this pain was different. She went back to her doctor, who sent her to someone else to have her stomach checked make sure her joint pain wasn’t connected to Crohn’s disease. It wasn’t.

“The rheumatologist was up next,” she wrote. For three months leading up to the appointment, she endured flares and inflammation in at least one joint — but often multiple joints — every single day. She journaled all of it (joint location, intensity, duration) for the doctor to review.

“Then he asked the one question no one had ever asked me before: ‘Does your back pain feel worse in the morning when you first wake up than after you’ve been up and moving for a while?’”

Then answer was yes. After X-rays and blood tests to confirm the rheumatologist’s suspicions, Cornelius was diagnosed with ankylosing spondylitis. “When he showed me the films and test results, I cried,” she wrote. “I wasn’t crazy. And that felt good. What I was dealing with had a name, and with a name I could regain some control over my life.”

Ankylosing spondylitis, or AS, is a type of inflammatory arthritis that primarily affects the spine and sacroiliac joints (where the spine connects with the pelvis), causing severe chronic pain and discomfort. The sites where ligaments and tendons attach to the bones (called the entheses) are also often involved, causing pain from enthesitis in places like the heel, bottom of foot, or elbow. AS symptoms usually appear in late adolescence or early adulthood, though they can occur even earlier or much later.

As the disease progresses, new bone forms as part of the body’s attempt to heal, which can cause sections of your spine to fuse and become stiff, resulting in a hunched-forward posture. Other joints may be affected as well — like the shoulders, hips, ribs, heels, and small joints of the hands and feet; inflammation may also occur in the eyes, causing a condition known as uveitis.

There are two main factors that contribute to the difficulty in diagnosing ankylosing spondylitis, says Susan M. Goodman, MD, a rheumatologist at Hospital for Special Surgery in New York City. “The first is the prevalence of back pain,” she says. “One estimate is that 90 percent of people see a doctor for low back pain some time during their life, so the index of suspicion when a young, active person complains of back pain is low.”

The other factor: there is a long lag between the time when symptoms appear and when tests would confirm a diagnosis or even suggest AS in X-rays, adds Dr. Goodman. X-ray of the sacroiliac joints — a pair of joints in your lower back, one on each side of your spine — often show changes called sacroiliitis in people with AS. Research shows, on average, there’s a seven- to 10-year delay in getting an AS diagnosis from the onset of symptoms.

Also, initial symptoms of AS can be atypical in some people, particularly women, which can make it even harder to diagnose. People might report symptoms other than lower back pain as their main complaint, for example.

And there’s no one lab test that to pinpoint AS. Certain blood tests can check for markers of inflammation, but inflammation can be caused by many different health problems. Your blood may also be tested for a specific genetic marker called HLA-B27, which is associated with AS. But not everyone with the gene has or will develop the condition. According to the National Institutes of Health, about 80 percent of children who inherit HLA-B27 from a parent with AS do not develop the disorder. And not everyone who has AS has HLA-B27. The genetic variant is more common in Caucasians than in African-Americans.

Conditions that Can Mimic AS

Ankylosing spondylitis is most common form of spondyloarthritis — the name for a family of inflammatory rheumatic diseases that primarily affect the spine, though other joints can also be involved. In its early stages, AS may seem similar to other forms of spondyloarthritis, such as reactive or enteropathic arthritis. “The diagnosis can be distinguished by the severity of radiographic (or X-ray) changes,” says Dr. Goodman. “But this is considerable overlap in early cases.”

Other causes of back pain may also be mistaken for AS. It’s important to learn about the differences in symptoms and diseases so you can be sure to be as specific as possible when describing your medical history to your doctor.

Some of the symptoms or conditions that mimic ankylosing spondylitis include:

The aches and pain you get from lifting something heavy or sleeping on a bad mattress is considered “mechanical” back pain, which means there’s been a disruption in the way the components of the back (the spine, muscle, intervertebral discs, and nerves) fit together and move, according to the National Institute of Neurological Disorders and Stroke. The kind of back pain associated with ankylosing spondylitis is considered inflammatory. It occurs when your immune system mistakenly attacks the joints in your spine.

A form of spondyloarthritis, reactive arthritis is joint pain and swelling triggered by a bacterial infection in another part of your body — most often your intestines, genitals, or urinary tract. A number of bacteria can cause reactive arthritis. Some are foodborne, such as salmonella and campylobacter, others are transmitted sexually, like chlamydia.

A study of CreakyJoints members found that 21 percent of women and 7 percent of men eventually diagnosed with AS were first told they had fibromyalgia — a chronic pain disorder that seems to involve the nervous system. The confusion in diagnosis may stem, in part, from the overlap in some symptoms between fibro and AS, such as lower back pain, fatigue, and sleep problems. Another factor: Fibromyalgia is much more common in women than men, and AS is mistakenly thought of as a “man’s disease.” Therefore, doctors may not necessarily suspect AS in female patients, especially if they don’t show damage to their joints on X-rays.

“Fibromyalgia may be diagnosed in a patient who has pain and normal X-rays, but the inflammatory features of AS and the specific abnormalities on more detailed MRI scans should distinguish the two,” adds Dr. Goodman. What’s more, it’s also common for some patients to have both fibro and AS (or its cousin condition, non-radiographic axial spondyloarthritis) at the same time.

Psoriatic arthritis can also cause pain at the points where tendons and ligaments attach to your bones — especially at the back of your heel or along the sole of your foot — also like AS. But some tell-tale signs of psoriatic arthritis (aside from psoriasis plaques) include fingernail changes and sausage-like swelling in the fingers and toes, called dactylitis. Read more here about psoriatic arthritis symptoms.

If you have inflammatory bowel disease (IBD), you may also have enteropathic arthritis. IBD involves chronic inflammation of your digestive tract; the most common forms are ulcerative colitis and Crohn’s disease. Enteropathic arthritis is arthritis that occurs in patients with IBD. It involves joints in your arms and legs, most often your lower legs. It can also cause inflammation in your lower spine and sacroiliac joints or affect your entire spine — similar to AS. Lower back pain and stiffness from enteropathic arthritis can occur before intestinal symptoms of IBD, such as abdominal pain and diarrhea, become noticeable. As a result, you may be diagnosed with spinal arthritis first and IBD later.

Short for diffuse idiopathic skeletal hyperostosis, this disorder is a type of arthritis that causes ligaments and tendons in the body to harden, usually around your spine. These hardened areas can form growths (called bone spurs) that can cause pain, stiffness, and decreased range of motion. DISH is more common in older adults and may be confused for AS in this age group because both conditions can cause similar limitations in spinal mobility and posture abnormalities, according to research. However, radiographic images will show a distinct difference. DISH causes vertical bone growths, explains Dr. Goodman, compared to horizontal bone growths of AS.

Findings from a physical exam and medical history are important factors in diagnosing AS. Though the course and symptoms of AS vary from person to person, some common signs and symptoms include:

In the early stages of AS, there may be mild fever, loss of appetite, and general discomfort. Over time, the stiffness and pain can spread up the spine and into the neck, and well the ribs, shoulders, hips, and heels. Some of the vertebrae in your spine may fuse together, making it less flexible. Fusion can also stiffen your rib cage, restricting your lung capacity and function. Another common complication: eye inflammation, which causes rapid-onset eye pain, sensitivity to light and blurred vision.

During a physical exam, your doctor may check for pain and tenderness along the back, pelvic bones, sacroiliac joints, chest, and heels. He or she may also ask you to bend in different directions to test the range of motion in your spine, or check for any restriction of chest expansion. Your doctor may also order blood tests to check for inflammatory markers, as well as the HLA-B27 gene.

Imaging studies are also a key factor in diagnosis: The hallmark of AS is damage to the sacroiliac joint from inflammation. X-rays can check for changes in your joints and bone, but visible signs of AS might not be evident early in the disease. “If plain radiographs are normal, your doctor may order an MRI to look for inflammatory changes of the sacroiliac joints,” says Dr. Goodman. An MRI uses radio waves and a strong magnetic field to provide more detailed images of bones and soft tissues. These scans can reveal evidence of AS earlier in the disease process but are much more expensive.

If ankylosing spondylitis is diagnosed, a rheumatologist should partner with you to develop a treatment plan to relieve your pain and stiffness, and prevent or delay complications and spinal deformity.