The researchers found that people whose uric acid levels were higher than recommended had ‘over twofold higher mortality risk compared with similar patients with gout who met target [uric acid] levels.’ 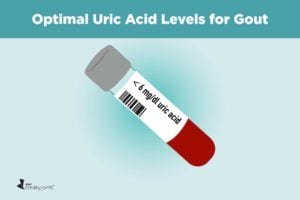 While gout is best known for causing stabbing pain in the big toe, there’s far more to it than that. A type of inflammatory arthritis, gout develops when high levels of uric acid build up in the blood, crystallize, and deposit themselves in one or more joints. This can lead to joint damage and deformities, as well as chronic inflammation that can impact other parts of the body.

The systemic inflammation associated with gout likely explains why, according to a new study, patients who don’t get their uric acid levels in check are more apt to die prematurely.

The study, published in the journal RMD Open, followed nearly 1,200 gout patients who were treated in Spain from 1992 to 2017 and found that those whose uric acid levels were higher than normal (higher than 6 mg/dL) during the first year after diagnosis were substantially more likely to die during the study period from cardiovascular disease or any other cause.

Guidelines from the European League Against Rheumatism (EULAR) suggest that anyone diagnosed with gout should take medication that enables them to keep the uric acid level in their bloodstream below 6 mg/dL. That usually means taking a uric acid-lowering medication such as allopurinol.

Patient who died during the study follow-up period were more apt to have had multiple joints impacted by gout, tophi (crystal deposits big enough to see or feel under the skin), and pre-existing cardiovascular disease. They also tended to be older (average age 75, compared to an average age of 58 for the survivors). But uric acid levels appeared to have a greater influence on mortality than any of those other factors.

The researchers found that people whose uric acid levels were higher than recommended had “over twofold higher mortality risk compared with similar patients with gout who met target [uric acid] levels … The findings from this study add credence to the hypothesis that elevated [uric acid] concentrations above 6 mg/dL contribute substantially to mortality and to shortened life spans.”

The good news is that patients who work with their doctors to monitor their uric acid levels and take medication as directed are more apt to stay healthy. Implementing strategies to keep uric acid low “are likely to confer a survival advantage beyond gout control and to improve patient outcomes,” the authors concluded.