This is reassuring news for parents of children with inflammatory arthritis. 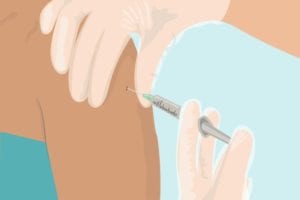 Vaccines trick your immune system into producing antibodies to viruses or bacteria so that if you’re ever exposed to them again your body will immediately know how to fight them off. Some accomplish this by introducing you to live, weakened (attenuated) versions of the same germs that cause diseases such as measles or chickenpox (varicella).

Live-attenuated vaccines are extremely effective, but they also have the theoretical potential to cause the illnesses they’re designed to prevent. That’s not a problem for healthy people, but if your immune system is compromised it might be.

Most people with inflammatory rheumatic conditions take disease-modifying drugs (DMARDs), biologic drugs, and/or glucocorticosteroids, all of which help, in part, by suppressing an overactive immune response. At the same time, rheumatic disease patients are more apt than healthy people to contract contagious diseases.

So should children with inflammatory arthritis get live-attenuated vaccines or avoid them?

This question has become more pressing in light of recent measles outbreaks. Many doctors have been giving the MMR (measles, mumps, and rubella) vaccine to kids with rheumatic disease, because they believe the risk of catching measles is far greater than any risk posed by the vaccine itself. To find out if that’s the right strategy, Israeli scientists led by Yosef Uziel analyzed data on 234 pediatric patients from rheumatology centers in 10 countries who had received an MMR or MMRV (which includes varicella) booster.

According to their findings, which were presented at the annual European Congress of Rheumatology (EULAR 2019) in Madrid, none of the patients experienced a disease flare or developed any serious infection after getting the MMR or MMRV shot. Most of the children — all of whom were on methotrexate and/or an anti-TNF biologic drug — did not have any side effects at all. Those who did had mild and fleeting reactions, such as local skin reactions or fever.

“There was no relation between disease activity, type or duration… and outcome of vaccinations,” the authors reported. “No vaccine infection related to measles, rubella, mumps and varicella were reported.”

“The positive results of our study suggest live-attenuated MMR and MMRV booster vaccination is safe in children with rheumatic diseases,” said Professor Uziel in a press release.