Could Stimulating a Nerve in the Neck Treat Rheumatoid Arthritis Instead of Medication?

A small study revealed encouraging news for patients whose rheumatoid arthritis didn’t respond to medications such as biologics. 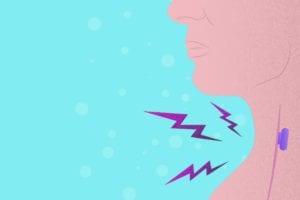 Vagus nerve stimulation, which entails sending mild electrical impulses to this long nerve that connects the brain to the digestive tract, is already FDA-approved for drug-resistant epilepsy and depression. Might this procedure help people with rheumatoid arthritis (RA), too?

It’s a plausible concept, considering that scientists recently discovered an “inflammatory reflex” in a brain circuit that appears to inhibit the production of inflammatory molecules that are linked to RA.

To find out if vagus nerve stimulation might be useful for rheumatoid arthritis, scientists led by Mark Genovese, MD, of Stanford University conducted a pilot study on 14 patients. Everyone in the study had previously tried at least two biologic or targeted drugs but did not respond well to them.

Patients in the study, which was presented at the annual European Congress of Rheumatology (EULAR 2019) in Madrid, all had a neurostimulator (MicroRegulator) device implanted under their skin. They were then randomly assigned to three groups: one had electrical impulses sent to the stimulator once daily; another received impulses four times a day; and the third (placebo) did not receive any impulses.

After 12 weeks, the patients who had received once-daily vagus nerve stimulation fared the best: Two-thirds of them had significant improvements in their disease activity scores (DAS28-CRP). Those in the placebo group did not improve.

“Our pilot study suggests this novel MicroRegulator device is well tolerated and reduces signs and symptoms of rheumatoid arthritis,” Dr. Genovese said in a release. “These data support the study of this device in a larger placebo-controlled study as a novel treatment approach for rheumatoid arthritis and possibly other chronic inflammatory diseases.”

Vagus nerve stimulation is generally considered safe, but possible side effects may include infection (related to the surgery to implant the device), throat pain, hoarseness, headaches, and insomnia. This therapy may also worsen sleep apnea, a disorder that is common in people who have RA.