What Are Gout Tophi? Here’s What Causes Them and How to Treat Them

Not everyone with gout gets these nodules, but here's what you need to know about why tophi might develop and how to best treat them. 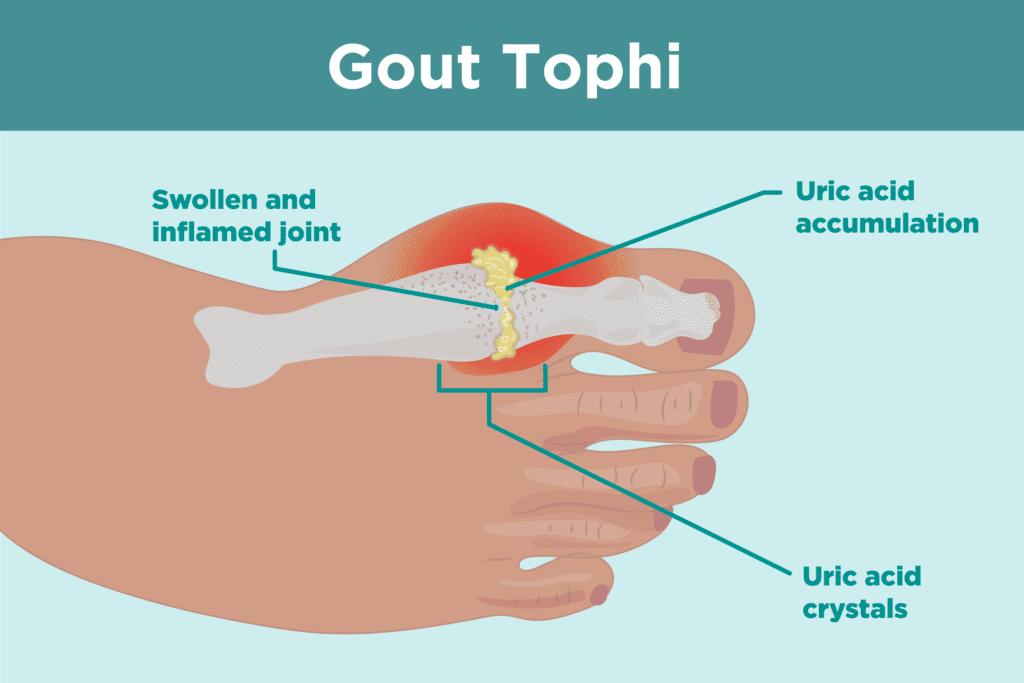 Gout, a type of inflammatory arthritis caused by elevated levels of uric acid, is well known for causing a lot of pain. Gout flare-ups occur when uric acid forms crystals that settle in a joint, often the big toe, where it causes warmth, redness, and excruciating pain. One highly visible manifestation is gout tophi, or large bumps that form where gout crystals have accumulated.

Gout can also affect other joints, such as the knees, ankles, wrists, and elbows. Over time, gout can become progressive: Flares occur more frequently, affect more joints, and cause underlying damage to your bones. Gout is a highly treatable form of arthritis; medications can help lower levels of uric acid in the body, which prevents flares and long-term damage from gout. But if your gout goes undiagnosed (perhaps because you’re not aware of all the gout symptoms) or isn’t well-controlled, you can start to experience complications.

Tophi are rarely an early sign of gout. Rather, they tend to occur in people who’ve had gout for a while, especially those who’ve had frequent flares. Here’s what you need to know about what causes gout tophi and how to prevent and treat them.

What Are Gout Tophi?

Tophi are large, visible bumps made of urate crystals. “They can form in joints, bone, or cartilage,” says Kaitlin A. Quinn, MD, a rheumatologist at Medstar Georgetown University Hospital. You might find them on your elbow, hands, feet, or the outer edge of your ear. Tophi tend to be easy to spot thanks to their size, but some smaller tophi can only be detected with an MRI or other imaging test.

Tophi look like nodules, bumps, or lumps that protrude from the skin. They look similar to nodules that are associated with more advanced cases of rheumatoid arthritis.

Tophi are not usually painful, but there are exceptions. They can become infected, which is likely to be painful. It’s also possible for tophi to press on a nerve, which can be both painful and potentially dangerous.

The biggest common problem, aside from the aesthetics of having tophi — “the appearance can be distressing for some patients,” says Dr. Quinn — is that tophi can damage joints, destroy cartilage, and lead to bone erosion. Over time, this can lead to significant deformity and disability from gout, as it becomes harder to move the affected joints.

Who Is Most Likely to Get Gout Tophi?

Someone who has been diagnosed with gout but rarely has a flare up — perhaps you have an attack once or twice a year — will be less likely to develop tophi.

You’re most apt to get these nodules if you have frequent, severe attacks. Frequent episodes of gout are an indication that your uric acid levels are consistently too high. That can happen to anyone with gout, but it’s more likely if you don’t follow your doctor’s instructions and don’t take your prescribed medication to keep uric acid levels in check.

How Are Tophi Treated?

The good news about these disfiguring and potentially disabling bumps is that they’re not necessarily permanent.

“The same treatments that are used to lower uric acid levels to prevent gout flares are also effective in decreasing the size of tophi,” says Dr. Quinn. Your doctor will most likely prescribe a uric acid-lowering drug called allopurinol, though other medications such as febuxostat, probenecid, and pegloticase are sometimes used instead. Read more about gout treatment options.

To get rid of visible tophi, your doctor may have to increase your medication dosage to ensure that your uric acid level is kept extra low. “Normally we try to get uric acid down to 6 mg/dL, but if you have tophi we tend to shoot for 5 mg/dL,” says Kenneth Saag, MD, professor of medicine in the division of clinical immunology and rheumatology at the University of Alabama at Birmingham. “We need to get it below the level at which the uric acid is able to crystallize.”

Dissolving large uric acid lumps is a slow process. Depending on how long you’ve had tophi, you might need to take medication for six months or longer before you see the tophi start to shrink or disappear.

In some rare instances, surgery may be warranted to treat gout tophi. Your doctor should only suggest surgery if your case is extreme — for instance, your tophi have become infected, are causing major joint deformity or severe pain, or are compressing crucial nerves in your body (such as nerves in your spinal cord).