The Signs Arthritis Is Affecting Your Lungs, and the 3 Things You Must Do to Protect Them

Flu and pneumonia vaccines are a must. 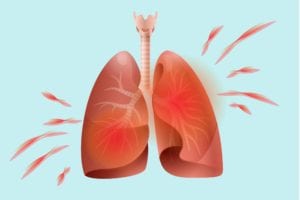 We say “rheumatoid arthritis,” you think joints — which, of course, makes sense. Rheumatoid and other forms of inflammatory arthritis are notorious for causing pain, stiffness, and swelling in your hands, feet, lower back, and other joints.

But the same chronic, systemic inflammation that targets those joints can also affect other seemingly unrelated parts of your body — such as your heart and your lungs. (Here’s how to protect your heart when you live with inflammatory arthritis.)

Some reports suggest about 10 to 20 percent of patients with rheumatoid arthritis have lung problems. One study published in the journal Rheumatology International found that number may be as high as 67 percent. Most cases of lung disease will occur within five years of being diagnosed.

What Exactly Does Arthritis Do to Your Lungs?

Inflammation from arthritis may damage the tissue, inflame the lining, or raise your risk of lung disease. Some lung problems linked to inflammatory arthritis include:

Scarring within the lungs

In medical speak, it’s called interstitial lung disease (ILD) — a broad category of lung disorders, most of which lead to scarring (fibrosis) in the tissue between the air sacs of the lungs (called the interstitium). Chronic inflammation from rheumatoid arthritis can lead to this scarring; over time, the buildup of scar tissue makes the lung tissue stiff, which interferes with breathing and can be difficult to treat.

ILD is the most common and most serious lung complication for people with RA: Research shows lung disease alone accounts for up to 20 percent of deaths in rheumatoid arthritis patients, and most are attributed to ILD. Though it’s rare, this scarring may also occur in a small number of people with ankylosing spondylitis.

Symptoms include shortness of breath and dry cough, as well as fatigue and weight loss. But by the time these signs appear, irreversible lung damage has often already occurred. Some estimates suggest about 30 percent of patients with rheumatoid arthritis have ILD, without obvious symptoms.

Nodules from Rheumatoid Arthritis in Lungs

These firm bumps of tissue, or rheumatoid nodules, might form in the lungs. They don’t typically cause symptoms, nor do they pose a risk for lung cancer. Nodules range in size from a millimeter to centimeters in size, there may be one or a bunch, and they may come and go over time. In some cases, however, a nodule can rupture and caused a collapsed lung.

There are thin membranes that surround the lungs and line the inside of the chest cavity called the pleura. If that tissue becomes inflamed, it can cause discomfort in your chest. Fluid can also build up between the two layers — a condition called pleural effusion. The fluid may resolve on its own in some cases; a large amount of fluid, however, can lead to persistent coughing, shortness of breath, or a collapsed lung.

Research published in the journal Arthritis Care & Research suggests people with RA are nearly twice as likely to be hospitalized for chronic obstructive pulmonary disease (COPD) than the general population. COPD is a chronic inflammatory lung disease that obstructs airflow to the lungs. Researchers note that many of the same markers of inflammation found in rheumatoid arthritis are elevated in COPD.

If you have rheumatoid, psoriatic, and other forms of inflammatory arthritis, you may have twice the normal risk for getting an infection like flu or pneumonia. That’s because these diseases decrease your body’s natural immune defenses, and therefore increase your risk of serious infection. Plus, certain medications you take to manage your condition also weaken or suppress the immune response, leaving you that much more susceptible.

Ankylosing spondylitis causes some of the vertebrae in your spine to fuse, which makes your spine less flexible. In severe cases, this fusion can also stiffen your rib cage, restricting your lung capacity and making it more difficult to breathe deeply.

How to Help Keep Your Lungs Healthy

After heart disease, lung disease is the second-most common cause of death in rheumatoid arthritis. To help protect your lungs follow these three steps:

1. Quit smoking. It’s harmful to your health in a million different ways. And the chemicals in cigarettes can irritate lung tissue even more. To get help, talk to your doctor or go to smokefree.gov. Quitting smoking can also help you achieve remission for your arthritis.

2. Get vaccinated. Respiratory infections are common infections in RA, and complications could be severe. There are two types of pneumonia vaccines — talk to your doctor about which ones you need and when you should get them. The annual flu shot is another must. Here’s what you need to know about getting the flu vaccine when you have arthritis.

3. Report any breathing problems to your doctor. Regular check-ups are important so your doctor can monitor your lungs. But be sure to tell your physician right away if you experience shortness of breath, consistent coughing, or other respiratory symptoms. Lung issues that are detected earlier may be easier to treat.

3 Ways to Create Comfort in Your Daily Routine: A Psychologist’s Coronavirus Perspective