17 Important Facts You Might Not Know About Ankylosing Spondylitis

From surprising symptoms to misdiagnoses to the toll on quality of life, AS is complex, complicated disease, for patients and their loved ones.

Ankylosing spondylitis (AS) and its related conditions, called spondyloathropathies, affect millions of Americans, but these diseases aren’t exactly a household name. Ankylosing spondylitis is a type of inflammatory arthritis that predominantly affects the spine and sacroiliac joints (where the spine connects to the pelvis), causing lower back, hip, and pelvic pain. But AS is a complex, mysterious disease that can affect many other different parts of the body too.

Chances are you might know someone with AS, or are concerned about potential signs and symptoms of AS. Here are important facts about AS you need to know to help you better understand the disease and treatment.

1. Ankylosing spondylitis is an inflammatory disease

Unlike osteoarthritis, AS isn’t a result of the joints’ natural wear and tear, but develops because of chronic inflammation in the body. Because of the nature of inflammatory pain, the symptoms will also be different from wear-and-tear arthritis, says Santa Fe rheumatologist Hillary Norton, MD, who has AS herself. “Something that differentiates inflammatory pain is that it tends to get worse when you’re not moving the joints,” she says. Because you don’t move around when you’re in bed sleeping, that also means that it tends to get worse at night and in the morning. Here are other key differences between mechanical and inflammatory back pain.

2. AS is a type of spondyloarthritis 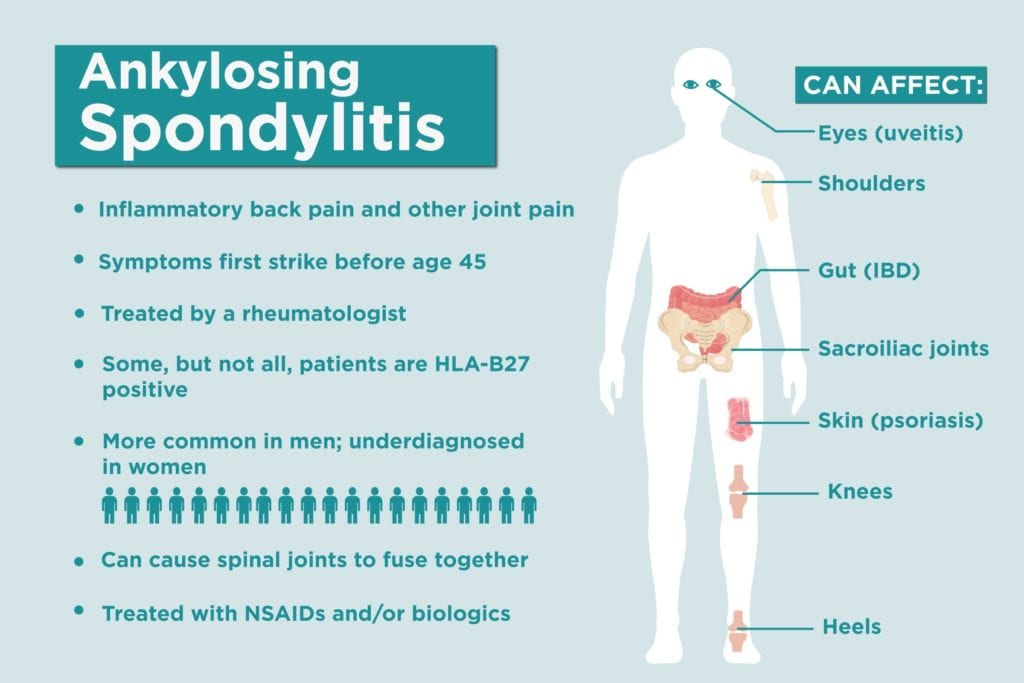 3. Back pain in AS has some unique traits

For one thing, AS back pain gets worse when you sit still or rest, particularly when you sleep, and particularly in the second half of the night. Patients commonly report getting out of bed in the second half of the night in pain. AS also causes something people refer to as “alternating buttock pain,” which stems from the lower back into the rear, often striking one side at a time.

4. AS symptoms vary from person to person

With so much overlap between ankylosing spondylitis and other spondyloarthropathies, there’s a wide-ranging checklist of symptoms that doctors look for when diagnosing AS. A classic case would start from the bottom of the back, where the spine meets the pelvis, and work its way up, but not everyone will present that way. Women in particular are more likely to see the pain start from higher up on the back, near the bra line, says Dr. Norton. Other people with AS might have peripheral spondyloarthritis, which means that the inflammation spreads to joints beyond the spine, such as the knees and hips.

While chronic lower back pain that gets better with movement and worsens with rest and that starts at a younger age (before age 45) is trademark symptom of AS, people are diagnosed with AS without having back pain as their main complaint.

5. AS symptoms aren’t limited to the joints

“Ankylosing spondylitis is a systemic inflammatory condition,” says Dr. Kumar. “We see it more in the joints because it causes the most pain in people, but AS can affect all kinds of other organs.” As a type of spondyloarthritis, AS also can be associated with symptoms related to other diseases under the umbrella, such as psoriasis and IBD. AS is linked with to red, irritated, painful eyes, a condition known as uveitis. In more severe, less controlled cases, the inflammation from AS can even increase the risk of heart problems.

6. Fatigue is a major AS symptom

Fatigue — full-body exhaustion that goes beyond just feeling tired from not enough sleep — is a common complaint in many different kinds of chronic illness. AS is no exception. One study found that about 65 percent of AS patients report fatigue as a symptom.

7. AS strikes the young

Although we tend to associate arthritis with middle age, inflammatory arthritis tends to first occur at younger ages. And of those, AS hits particularly young — about 80 percent of patients will experience their first symptoms before age 30; a mere 5 percent will notice the signs at 45 or older, according to Johns Hopkins Arthritis Center.

8. AS can affect men and women differently

Men are more likely than women to develop AS, though doctors aren’t sure why. There also seem to be sex differences in how the disease affects male vs. female patients. A 2018 research review found that men tend to have more and faster radiographic damage, while women are more likely to have more non-joint symptoms like psoriasis and IBD, and higher disease activity. Read more about differences in how AS affects women and men.

9. Genes can play a role in AS

Even though scientists haven’t figured out why certain people develop ankylosing spondylitis, genes play a role. In particular, the genetic variant HLA-B27 is associated with an increased risk of developing AS, and other genes have recently been linked with the disease (such as ERAP1, IL23R, and EL1A). That said, testing for the HLA-B27 gene can’t rule out or clinch a diagnosis. Only about 2 percent of people who carry the HLA-B27 gene will go on to develop spondyloarthritis, according to the Spondylitis Association of America, and not everyone with AS has the HLA-B27 gene.

10. Race has its own risk factors

Potentially related to the prevalence of the HLA-B27 gene, which is more common among white people, Caucasians are at a greater risk of developing AS than people of other races. But according to a study of 925 ankylosing spondylitis patients, black patients have more severe disease activity than their white or Latino counterparts.

11. An earlier stage of AS form has a different name

Because of certain diagnostic criteria, it can take a notoriously long time to get diagnosed with ankylosing spondylitis. Until joint damage in the spine shows up on an X-ray (which could take up to a decade from the time you first experience symptoms), you won’t technically be diagnosed with AS.

But if you have AS-like symptoms and risk factors, you could be diagnosed with a related condition called non-radiographic axial spondyloarthritis (nr-axSpA) — “non-radiographic” refers to the lack of evidence on imaging tests. As damage progresses, your diagnosis can move along the spectrum from nr-axSpA to full-blown AS.

The reason this distinction is important is because until recently, biologic drugs have only been FDA-approved for AS and not for nr-AxSpA. This made it challenging for patients who were coping with a lot of inflammatory pain to get proper treatment. However, the first biologic drug was just approved to treat non-radiographic axial spondyloarthritis, and others will likely follow in coming months and years.

12. X-rays aren’t the only thing doctors use to help diagnose AS

While X-ray changes are what set apart nr-axSpA from AS, they aren’t the only thing to clinch a diagnosis. A rheumatologist will likely order blood tests to look for inflammatory markers and potentially the HLA-B27 gene, as well as review the patient’s history and symptoms and conduct a thorough physical exam. “It’s really more of an art than a science at this point,” says Dr. Kumar. Read more about how doctors go about diagnosing AS here.

13. It can take a long time to get diagnosed with AS

Study findings vary, but patients who are ultimately diagnosed with AS usually experience a significant delay between when they first experience symptoms and when they learn they have AS. One 2016 study in the journal Archives of Rheumatology found that the average delay was eight years. Women tend to take longer to be diagnosed with AS than men. Being negative for the HLA-B27 genetic marker and having enthesitis, or inflammation where tendons and ligaments connect to bone, such as at heel or bottom of the foot, was also associated with longer diagnostic delays.

14. Misdiagnoses of other conditions are common

For many reasons, which are still being studied, being first misdiagnosed with different diseases is common among AS patients. For one thing, lower back pain is an extremely common medical complaint, so people likely seek medical attention with a primary care doctor or use care providers like chiropractors or physical therapists to manage their symptoms. When AS presents with many symptoms aside from lower back pain, it may also be overlooked as a potential cause. In a study of CreakyJoints members presented in 2018 at the Annual European Congress of Rheumatology, patients reported seeing a number of different types of health care providers during their diagnosis journey, including general practitioner (87%), rheumatologist (65%), orthopedist (27%), chiropractor (26%), and urgent care/emergency room doctor. Common misdiagnoses included general back problems, psychosomatic issues, sciatica, anxiety/depression, and fibromyalgia.

15. Over time, the spine could fuse together

In some people, the extent of AS joint damage might be signs of inflammation, bone erosion, or bone thickening. But in others, calcification of the discs and ligaments between back bones could make the vertebrae fuse together. As this progresses into “bamboo spine,” patients can lose mobility in their back. Thankfully earlier diagnosis and more aggressive treatment of AS can help prevent or delay this.

16. AS can have a huge impact on patients’ quality of life

AS patients go through a lot. In part because of the slow progression and invisible nature of the disease, people go years without a diagnosis, a name for their symptoms, or proper treatment. A 2018 study from our parent nonprofit the Global Healthy Living Foundation found that AS has a staggering impact on people’s work lives and relationships.

For example, roughly half of the 235 respondents in the study reported being unemployed; the vast majority of those (91 percent) reported that this was due to AS. Among the people who were still working, AS affected many aspects of their daily work lives. People reported difficulty sitting or standing for long hours (72 percent), missing work (47 percent), difficulty doing physical tasks (42 percent), and loss of productivity (41 percent).

17. There’s no cure for AS, but there is treatment

“There are better diagnostic and treatment options today than there were even 10 years ago,” says Dr. Kumar. Nonsteroidal anti-inflammatory drugs (NSAIDs) might be used in milder cases, but many people will require additional options like biologics, which target specific immune system cells to ease inflammation, as well as corticosteroids, which help to suppress inflammation during flare-ups.

Track Your AS Symptoms with ArthritisPower