These stubborn myths aren’t just annoying to patients who know better; they are risky to believe for people who are just starting to learn more about their disease. 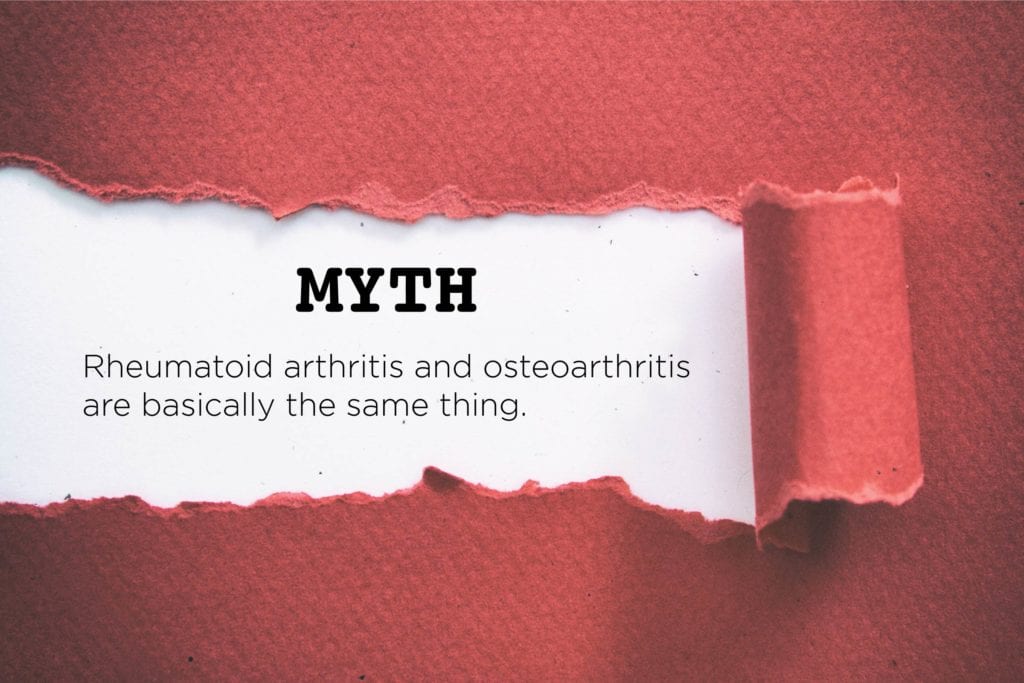 Understanding the all the nuances of a complicated chronic illness like rheumatoid arthritis is not easy. It’s natural to make assumptions based on the name of the disease alone — the very word “arthritis” conveys certain impressions about age, symptoms, and treatment that don’t necessarily apply to inflammatory arthritis like RA.

These stubborn myths aren’t just annoying to patients who know better; they are risky to believe among people who, say, are newly symptomatic or diagnosed and are just starting to learn more about their disease. The doctors, therapists, and patients that CreakyJoints spoke to for this article were all too happy to clear up these common misconceptions.

1. Myth: Rheumatoid arthritis and osteoarthritis are basically the same thing

They’re both called “arthritis” and both involve joint pain, but that’s about where the similarities between rheumatoid arthritis and osteoarthritis end. Far more common, osteoarthritis is caused by wear and tear of the cartilage between joints. RA, meanwhile, is an autoimmune disease in which the body starts to attack its own tissue.

“Rheumatoid arthritis is not just an arthritis — it has a systemic effect,” says John Davis III, MD, a rheumatologist with Mayo Clinic. Because RA creates an inflammatory state in your body, it can affect everything from your heart disease risk to your lung health. Leaving RA untreated or undertreated can take a serious, or even life-threatening, toll on the rest of your body.

This myth is partly why it’s so frustrating to people with RA—or other inflammatory arthritis, such as psoriatic arthritis or spondylitis—when others say things like, “but you’re too young to have arthritis!” Here are more things to never say to someone with RA.

Most people associate arthritis with the joints, but RA goes beyond that. It’s a systemic disease, which means it can affect the entire body, from the heart to the brain, and the fatigue alone can be debilitating. “People say, ‘Where is [your arthritis],’” says Cheryl Crow, an occupational therapist who has RA. “I’m like, ‘It’s my entire body.’” Brain fog is another big issue people with RA often deal with.

3. Myth: Just give it time and RA will get better

People who don’t have RA sometimes find it hard to grasp the ebb and flow of a chronic, “invisible” illness. If you were feeling crappy a few weeks ago, shouldn’t you be better by now? Unfortunately, that’s not how these chronic #spoonie conditions work. “A lot of people think of it as the model of you hurt something. I hurt my hand and it gets better,” says Crow. “It’s not an injury. It’s a lifelong illness.”

4. Myth: Avoid medication because the side effects are risky

Maybe you’ve heard the warnings during TV commercials, read a dramatic story in an online chat group, or maybe you don’t want to commit to a lifetime of pills, injections, or infusions. As daunting as it can be to start a long-term prescription drug, the side effects of putting off taking medication are much scarier.

Left unchecked, the inflammation from RA can lead to permanent cartilage damage, heart disease, and more consequences, says Ashira Blazer, MD, a rheumatologist at NYU Langone Health. “Medications have side effects, but diseases have effects,” she says. “No drug that’s more dangerous than the illness itself would be approved.” Read more about why you should never downplay your arthritis symptoms to your doctor.

5. Myth: If your symptoms feel better, you can stop taking medication

When you’re eager to get off medication, it’s tempting to stop taking it when you start improving — but remember that it’s those very medications that keep your cells from attacking your own body.

“The immune system is very tenacious,” says Dr. Blazer. “Once it finds something it thinks is foreign, it will keep going after it unless you give it a reason not to.” When the drugs stop blocking inflammation, the pain could come back, so talk to a doctor before making any changes to your treatment game plan.

6. Myth: People with RA need to follow one specific diet

An anti-inflammatory diet could help ease joint pain, but you might not need to give up gluten or “nightshade” vegetables like tomatoes and eggplants just because ditching these foods worked for your friend.

With an elimination diet, you’ll stop eating common RA triggers like sugar and dairy for a few weeks, then re-introduce them slowly, says Joe Feuerstein, MD, director of integrative medicine at Stamford Hospital in Stamford, Connecticut. You might find some foods make no difference to your symptoms, while others may seem to trigger flare-ups. Talk to your doctor or a certified nutritionist before starting an elimination diet. “It is better to do this under supervision, as it is quite restrictive,” says Dr. Feuerstein.

You aren’t getting the most out of occupational therapy if you think the practitioner can only help you with fine motor skills. “Sexual activity and sleep are two areas of occupation where we’re licensed,” says Crow. OT can help you find strategies to reduce pain during both. Don’t be shy. Read more about how to tweak your sex life when you have arthritis. 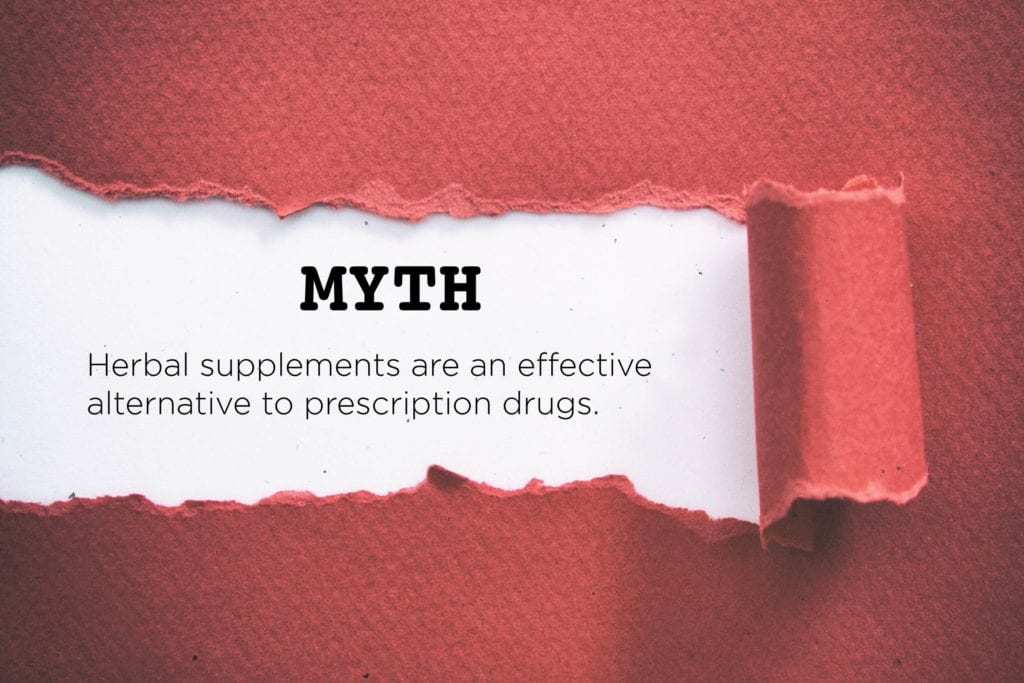 8. Myth: Herbal supplements are an effective alternative to prescription drugs

While the “natural” element of herbal supplements may seem like a safe alternative to disease-modifying antirheumatic drugs, science says otherwise. For instance, some RA patients take glucosamine — which could ease osteoarthritis — but one study found that even though certain symptoms improved, the supplements didn’t reduce inflammation like DMARDs do.

Meanwhile, others could have scary interactions with the medications that are proven to work. Methotrexate already increases risk of liver problems, and if you add in a supplement that’s toxic to the organ (such as chaparral), you could speed up the damage. “I’m a bigger proponent of food as medicine,” says Dr. Blazer. “If it doesn’t improve arthritis, at least you’re eating a healthy diet, which is its own reward.” Meaning: Get your vitamins, minerals, and other nutrients through your diet instead of through taking supplements (unless your doctor suggests taking a certain supplement to meet a specific deficiency or health need).

9. Myth: Rheumatoid arthritis is just a part of aging

Elderly people aren’t the only ones who have to deal with joint pain. The average onset of RA is age 58, and many people are diagnosed much younger than that. That’s because RA is caused by an immune system gone awry; it has nothing to do with how your joints are aging.

People who don’t have RA sometimes don’t realize how the effects of the condition can affect just about every daily activity, says Katie S. of Detroit, Michigan, who has rheumatoid arthritis. “When buying groceries, clothing, or anything else, cost and need comes after accessibility. Can I open that container, can I fasten those closures?” she says. “Energy is tricky. Just because I am up to leaving my house does not mean I am up to tackling stairs.” Check out these tips for making getting dressed with arthritis easier.

11. Myth: RA can easily be diagnosed with a blood test

In many people with RA, a blood test called the rheumatoid factor will show that the immune system is attacking your own cells. But some people with RA will test negative, and some people without RA will test positive. “For most disorders, people think a blood test clinches the diagnosis,” says Dr. Blazer. “That’s not true for autoimmunity, and it’s not true for rheumatoid arthritis.” Doctors look at blood tests (just rheumatoid factor, but a few others as well), imaging studies like X-rays and MRIs, and also consider your symptoms as a whole before concluding a diagnosis.

12. Myth: Exercise is bad for RA because it puts pressure on the joints

Exercise isn’t just something you can do with rheumatoid arthritis—it’s something you should do. You might not be able to do workouts that are hard on your joints like running, but low-impact options such as swimming and cycling can improve your symptoms. A 2014 review in the journal Nature found that when you work out, you burn off pro-inflammatory fat, while your muscles produce anti-inflammatory proteins. Another study found that RA patients who went on a 12-week exercise program significantly improved their sleep quality and fatigue. Here’s what the latest guidelines say about exercising with arthritis.

13. Myth: Switching to alkaline water will help you beat RA

Some people believe that acidic pH levels in the body lead to RA; by that logic, drinking alkaline water could help neutralize those pH levels and, the thinking goes, help reverse the disease.

The thing is, there’s no research that shows that pricey alkaline water has any benefit for rheumatoid arthritis. “The biggest benefit is you’re drinking more water,” says Dr. Blazer. “It’s probably not harmful, but it can be expensive.”

Your genes do play into the likelihood of developing an autoimmune condition like RA, but that doesn’t mean you should automatically fear passing it onto your children. A person who’s predisposed to a disease might never get it, and the majority of children of people with rheumatoid arthritis won’t get it too, says Dr. Blazer.

15. Myth: There’s no hope for people with a chronic condition

Being diagnosed with a chronic condition like RA can be understandably scary, but it’s important not to let yourself get caught up in gloom and doom, says RA patient Katie. “There being no cure is depressing. Chronic pain and fatigue is depressing,” she says. “But life expectancy continues to improve, research has increased, and new treatments are being developed. There is always hope.”