It’s important to make sure gout treatment actually reduces deposits of uric acid crystals in the joints, aside from lowering blood levels. 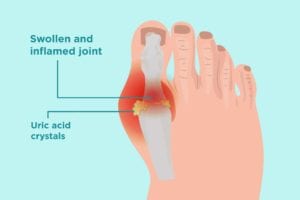 Gout, a painful form of inflammatory arthritis, occurs when uric acid levels get too high, which leads to the formation of crystals that deposit themselves in the joints. In order to prevent future gout flares, most patients need to take medication such as allopurinol that aims to reduce uric acid levels. Some also change their diet in an effort eat fewer high-purine foods. Purines are substances that get converted to uric acid in the body.

For the most part, studies have aimed to determine how effective these changes are at reducing levels of uric acid in the blood or the number of patient-reported gout flares. But it’s possible to have uric acid deposits without any noticeable symptoms; it’s also possible to have high uric acid levels in the blood that your body sufficiently excretes and therefore doesn’t lead to deposits of crystals in the joints.

To find out whether gout treatment actually translates to fewer crystals depositing in the joints, researchers from Germany followed a group of 83 patients with gout who had evidence of uric acid crystals at baseline, based on imaging tests. All of the patients were advised to reduce their intake of purines; those who had already experienced two or more gout attacks were also given uric acid-lowering medication.

After an average of 18 months, participants had another imaging test (DECT scan). The researchers found that everyone who had stuck with treatment (six dropped out during the study) had fewer or smaller uric acid deposits. The study was published in the journal Arthritis & Rheumatology.