New research further confirms that patients with AS have options when it comes to picking the best treatment for them. 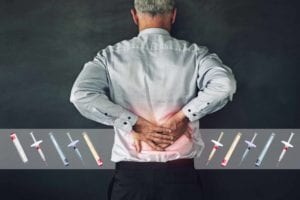 The goal of any treatment for ankylosing spondylitis (AS), an inflammatory type of arthritis that predominantly impacts the spine and sacroiliac (SI) joints, is to ease the pain and help prevent damage from worsening. One relatively new medication to hit the market, Cosentyx (secukinumab), has shown promising results. It works by blocking a protein, IL-17, that would otherwise cause inflammation.

To figure out who’s a good fit for AS drugs that belong to a different (and older) class of medication called TNF (tumor necrosis factor) inhibitors — which act on a slightly different part of the immune system — doctors often order blood tests to measure an inflammation marker called C-reactive protein.

Patients with elevated levels of C-reactive protein usual respond well to TNF drugs. But no one had studied the connection between C-reactive protein and Cosentyx. So a new study, published in the journal RMD Open: Rheumatic & Musculoskeletal Diseases, sought to explore it.

According to this study, people with AS responded well to Cosentyx whether they started out with high levels of C-reactive protein or not.

Researchers from Ruhr-University Bochum in Herne, Germany analyzed data from two previous studies to determine whether it was necessary to have elevated levels of C-reactive protein before treatment began to benefit from Cosentyx. They concluded that this injectible medication “demonstrated rapid and sustained efficacy in patients with AS irrespective of baseline [C-reactive protein]… This analysis shows that patients with normal baseline [C-reactive protein] levels also have a strong likelihood of experiencing a positive treatment response with IL-17A inhibition.”

If you’re currently using another type of AS medication and it’s working for you, this doesn’t mean you should switch to Cosentyx. But if you’re not getting great results and are ready to consider something new, Cosentyx might be a good option — even if your C-reactive protein levels appear to be normal.

This study was funded by Novartis, which is the pharmaceutical company that makes Cosentyx.