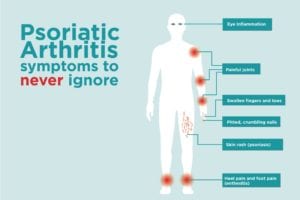 Autoimmune disorders are among the trickiest types of conditions to diagnose, and psoriatic arthritis is no exception. There aren’t any blood tests that can identify this form of arthritis, which causes inflammation of the joints, skin, and nails.

To complicate matters, some doctors don’t always consider a diagnosis of psoriatic arthritis (PsA) because they may be looking for joint symptoms associated with rheumatoid arthritis.

Most people experience this symptom for an average of seven to 12 years before the onset of psoriatic arthritis. Overactivity of the immune system speeds up the life cycle of skin cells, causing a buildup of rough, dead skin. The result: Red patches of skin with silvery scales called plaques. While plaques are often quite noticeable and may cover large areas of the body, that’s not always the case.

“The most common place plaques develop is on the scalp, so some people may not even realize they have psoriasis because they can’t see the plaques,” Dr. Ogdie says. “They assume they have dandruff or eczema and may not pay much attention to it.”

Psoriasis can also affect the fingernails and toenails, causing them to separate from the nail bed, develop pits, and appear thick and flaky. It’s generally considered that people with psoriasis who experience these nail changes are more likely to develop PsA that those with no nail involvement, according to Dr. Ogdie.

People with psoriatic arthritis can also experience back, hip, and shoulder pain —symptoms it shares with other conditions called spondyloarthropathies, which include ankylosing spondylitis and reactive arthritis. Rheumatoid arthritis, unlike PsA, isn’t categorized as a spondyloarthropathy, so pain in these areas helps distinguish between the two diseases. Read more about ankylosing spondylitis symptoms here.

Even though there aren’t any blood tests that help identify psoriatic arthritis, your doctor will test for some markers of inflammation — such as rheumatoid factor — to rule out RA and other types of arthritis. Imaging tests such as X-rays and ultrasounds are also used to detect changes associated with PsA, such as new bone formation and inflammation in the capsule of the joint and attachment points of the tendons and ligaments.

If you’re experiencing symptoms of PsA, it’s very important to see your doctor as soon possible.

While there’s no cure for psoriatic arthritis, there are several treatment options available, and most people will gain some benefit from them, she adds.

Some commonly used medications are NSAIDS (such as ibuprofen) and disease-modifying antirheumatic drugs (DMARDs), which can slow or prevent tissue and joint damage and the progression of PsA. For those who don’t respond, a subset of DMARDs called biologics may be recommended, which are usually given by infusion or injection. Topical treatments to manage psoriasis symptoms include retinoid and steroid creams, prescription vitamin D creams, and over-the-counter or prescription salicylic acid creams, gels, and shampoos.