If you have osteoarthritis in the joints of your fingers, you could have what’s known as ‘inflammatory OA.’ 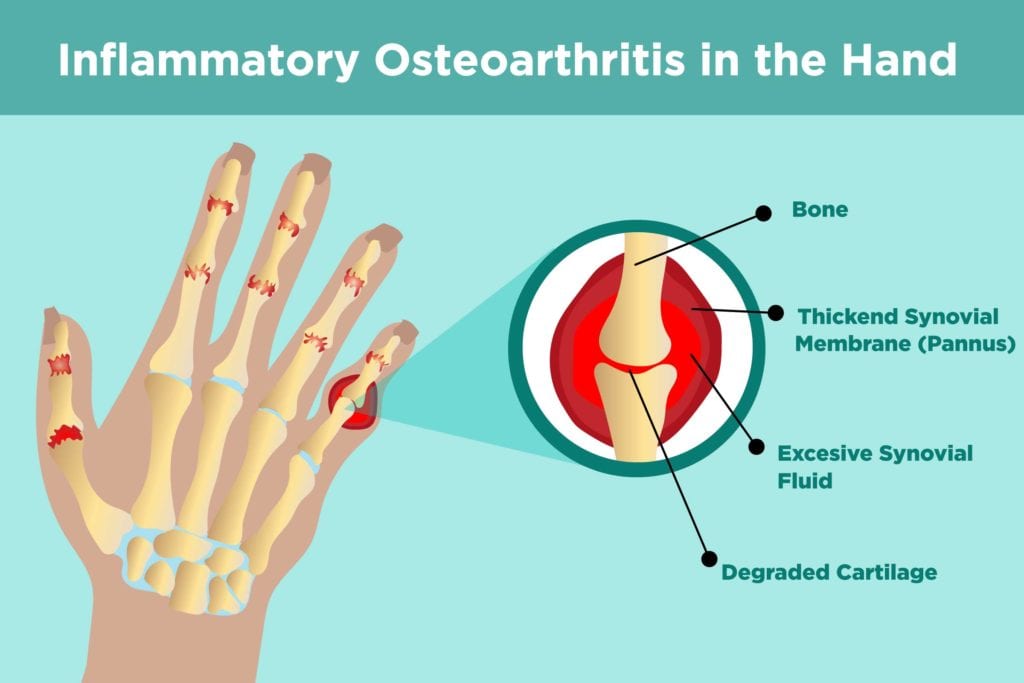 Osteoarthritis (OA) of the hand is very common, especially as you get older. But your hands contain numerous joints, and OA doesn’t always strike all of them equally (or at all).

Some people only have OA at the base of their thumb, where the thumb connects to the wrist, while others also have it in the joints of the fingers themselves. According to a recent study, published in the journal Arthritis Care and Research, people who have OA in their finger joints in addition to at the base of their thumb have significantly worse functioning and strength.

Many people who have OA in the joints of the fingers are believed to have what’s known as inflammatory OA. While OA is generally thought of as a “wear-and-tear” condition caused by the deterioration of the cartilage that normally cushions the joints, inflammatory OA is a version that’s also associated with swelling and warmth. Inflammatory OA tends to come on suddenly and is more aggressive than other forms of OA.

In contrast, people who only have OA at the base of the thumb tend to have less inflammation and more joint laxity (looseness and instability).

This study, which was conducted by Australian researchers, also found that joint erosion was associated with a decrease in strength. People who had erosive disease — whether they had finger joint involvement or just OA at the base of the thumb — were the most likely to have low grip and pinch strength.

Because these distinctions suggest that there are different types of hand OA, patients might benefit from more tailored treatment approaches. “We propose that the co-occurrence of [finger] joint pain and erosive OA may be important factors for patient stratification in thumb base OA trials,” the authors wrote in their discussion. “In clinical practice, clinicians [should] modify the treatment in patients with both thumb base and [finger] joint pain, for example by designing supports that address both joints and modifying the exercise program accordingly.”