Some signs of gout, like pain in the big toe, may be obvious. But other gout symptoms can be more subtle. 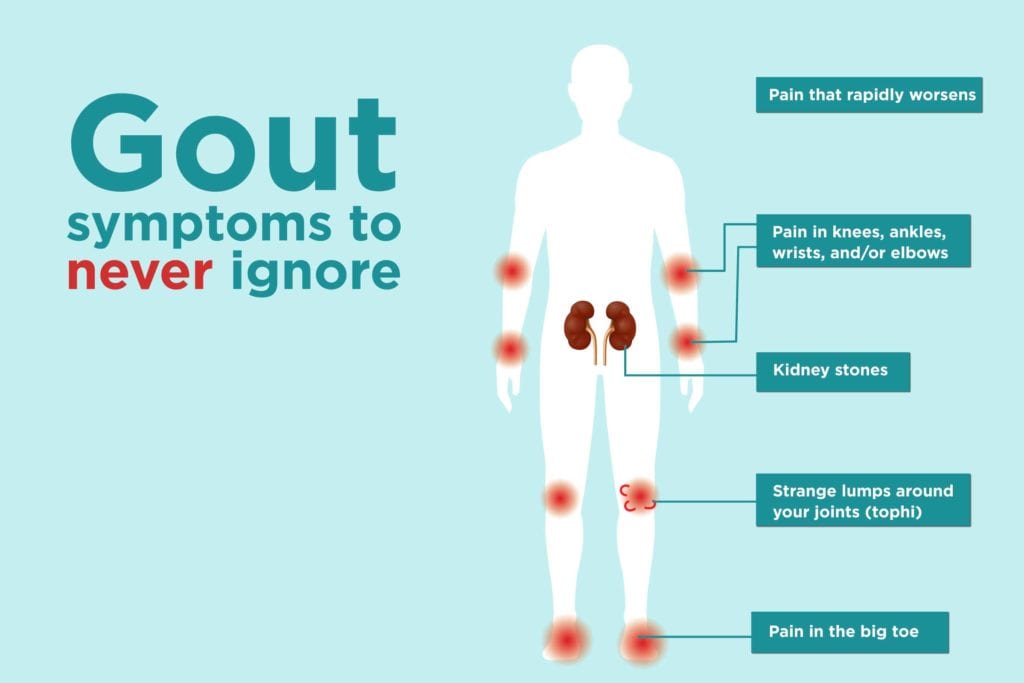 Once upon a time, gout was known as the “disease of kings” because it was thought to be more common among wealthy, overweight men who could afford to over-indulge in rich foods and alcohol. While diet and obesity remain important gout risk factors, your social class or bank account is no longer relevant to your risk of developing gout, which is on the rise. Incidence of gout more than doubled between the 1960s and 1990s; today nearly 4 percent of U.S. adults have it.

Gout is a form of arthritis that causes severe, sudden attacks of inflammation. Gout happens when there is too much of a chemical called urate in your blood (known as hyperuricemia). This causes uric acid crystals to build up in your joints, causing the telltale gout pain. Your body produces uric acid when it breaks down purines, substances that are naturally found in your body as well as in certain foods. While diet itself does not cause gout, certain foods and drinks may trigger gout flares. People who develop gout likely have some genetic predisposition combined with other risk factors or conditions — such as kidney disease or diabetes — that cause uric acid to build up in the body.

Although men are more likely to develop gout, women can get it too — and the chances of that happening goes up after menopause, says Joseph Huffstutter, MD, a rheumatologist with Arthritis Associates in Hixson, Tennessee. In short, anyone can get gout, provided your body doesn’t properly break down uric acid properly so it has a chance to crystallize in the joints.

Gout is highly treatable, but in order to address it you have to know that you have it — and the symptoms of gout aren’t always obvious.

“In rheumatology circles, gout is considered a great imitator because it can present in many different ways,” says Dr. Huffstutter. If you have any of the follow gout symptoms, talk to your doctor. You may need testing (aspiration and testing of joint fluid) to determine if gout is to blame.

Pain in your big toe

This is the classic hallmark of a gout attack, making it the most clear-cut gout symptom. “Some uric acid comes from diet, but most is a byproduct of normal metabolism,” Dr. Huffstutter explains. If you reach a point where your body is no longer good at breaking uric acid down — perhaps because of kidney disease, diabetes, a medication you’re taking for hypertension, or just plain old aging — uric acid will build up and form crystals. Those crystals often migrate to the toe, where they get attacked by your body as foreign invaders. The result: excruciating pain, warmth, and redness. “Even having a bed sheet touch [your toe] is extremely uncomfortable,” says Dr. Huffstutter.

Pain in your knees, ankles, wrists, and/or elbows

While uric acid crystals tend to deposit themselves near the big toe, they can form in any joint in the body. That means severe, unexplained pain in any joint could be a sign of gout.

Some people develop pain in just one joint (i.e., the left knee), but about 25 percent of gout patients have “polyarticular” symptoms — meaning they strike more than one joint at a time, says Dr. Huffstutter.

When gout shows up in multiple joints it’s especially hard to diagnose, he adds, because gout can mimic other conditions like rheumatoid arthritis.

Intense pain that strikes in the middle of the night

Gout flares are twice as likely to happen at night (between midnight and 8 a.m.) than during the day. This is because of a few different factors, including lower body temperature and being more dehydrated overnight, which can allow uric acid to accumulate more readily.

Pain that occurs in flares: rapidly worsens, then starts to ease up

If you’ve been waking up every morning with stiff, painful knees, you’re probably not dealing with gout. Gout-related pain tends to go from zero to 60 in less than 24 hours. Some people go to bed feeling perfectly fine, then wake up during the night with intense pain.

Gout tends to strike as intense flares of pain that dissipate within a few days to a few weeks. Months or years can go by between gout flares at first. But if gout is left untreated, the flares can start to occur more frequently and become more intense and debilitating, affecting more joints at the same time. During the periods between gout flares, patients often have no symptoms and feel totally fine. This pattern is highly suggestive of gout compared to many other types of arthritis.

During a gout attack — whether you’ve never had one before or are a chronic/recurrent gout patient in the midst of a flare — you might feel so wiped that it reminds you of having the flu. You might have a fever and muscle aches, too.

Strange lumps and bumps around your joints

Called tophi, these lumps are actually mounds of uric acid crystals. Tophi are most common in chronic gout patients, so you’d probably notice joint pain long before getting to this point. If you do develop tophi, you should know that these aren’t permanent deformities, says Dr. Huffstutter. With proper treatment you can dissolve these crystals so they’ll disappear.

If you have a severe gout attack or have been living with gout for a while, you could end up with kidney stones because excess uric acid can builds up in the urinary tract and crystallize there. Kidney stones are more of a complication of gout than a symptom, but if you develop this equally painful issue your doctor should check your uric acid levels to see if gout might be a possibility.

However, you should know that testing uric acid levels in the blood isn’t sufficient to diagnose gout: “During an attack, a doctor should remove fluid from an affected joint and analyze it under a microscope,” says Dr. Huffstutter. If it’s gout, uric acid crystals will be visible.

Use Our ArthritisPower App to Manage Your Gout

Get access to our Gout Patient Guidelines by subscribing to CreakyJoints today.

COVID-19, Chronic Illness, and the CDC: Key Learnings from Our Facebook Live Event

The Signs of Toxic ‘Worst-Case Scenario’ Thinking, and How to Shut it Down

I Have a Bad Case of ‘Reopen Envy,’ A Chronic Illness Patient Confesses