How to Cope When People Stare at Your Psoriasis

Our psoriasis warriors and mental health experts agree: You can't control the stares, but you can control your reaction and how you choose to respond.

If you have psoriasis, you’re probably no stranger to “skin shame.” For example, when you’re flaring do you think you should spare people the sight of your plaques by, say, wearing long sleeves and long pants (no matter how hot it is outside!) or just staying home altogether? Have you caught yourself agreeing with the people out there who think psoriasis is kinda gross?

Researchers call this “internalized stigma” — i.e., when you believe the bad stereotypes about your illness and apply them to yourself — and unfortunately, it seems to affect many people with psoriasis, according to a study in The Journal of Dermatology.

Take Linda Tran, 33, who’s been living with psoriasis for the last 13 years: “When I first had psoriasis, I was really insecure. I would just hide; I didn’t want anyone to see my skin — it was red. It was flaky.”

It doesn’t help that as a person with psoriasis, you may find yourself fielding stares from total strangers.

“My parents used to take me on beach holidays to help my skin,” says Toronto-based mindful living guide Reena Ruparelia (reenarup.com), who was diagnosed with the disease at age 14. “But I would wear long pants because I was afraid of being seen. Getting on to the beach and having people stare is one of the worst feelings in the world.” 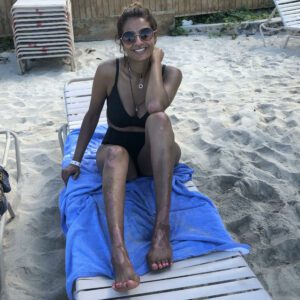 The beach is also a painful trigger for Joni Kazantzis (justagirlwithspots.com), who was diagnosed at 15. Having grown up on Long Island, Joni, 39, was determined not to let a few psoriasis spots stop her from enjoying the beach, but just a few weeks after her diagnosis she was settling into her sand chair when a woman marched up to her.

“She asked me if I had the chickenpox or something else contagious,” recalls Joni, who lives in Princeton Junction, New Jersey, with her husband and two daughters. “I was horrified, and before I could explain, she went on and on about how irresponsible I was by putting others in danger of catching my disease. Looking back, I’m appalled at how this grown woman verbally assaulted me.”

And Alisha Bridges, 34, a copywriter in Atlanta — she still remembers an episode that happened when she was working at a clothing store 10 years ago. “I was about 90 percent covered with psoriasis — it was on my hands and neck, so I couldn’t hide it,” she says. “I’ll never forget these two little kids, around age 9. One of them looked at my hand and said, ‘Ewww, that’s nasty! What’s going on with her skin?’ In that moment, I lost all my confidence, and I felt really insecure.”

Getting Comfortable in Your Skin

How can you deflect such intrusions and outright affronts instead of absorbing them and feeling worse about yourself? People like Linda, Reena, Joni, and Alisha say it takes time, maturity, and confidence — literally getting comfortable in your own skin.

We asked those psoriasis warriors and Philadelphia-based clinical psychologist Ann Rosen Spector, PhD, to share their experiences and insights:

“The thing that is different is always an attraction to us,” explains Rosen Spector. “We have a sense of what things ought to be, so when things are different it catches our eye.” Bottom line: People are simply wired to notice. In fact, researchers in Australia found that the subconscious mind scans the environment for signs of potential disease and urges us to stay away — even if a disease isn’t contagious.

Reena, 41, started an Instagram page, @psoriasis_thoughts, in 2016 to help her better cope with psoriasis. “One of the things I decided to do was to wear shorts while I was covered in psoriasis and go on the bus,” she recalls. “Before I left the house, I did some breath work to get my body feeling calm, and I gave myself a pep talk in the mirror. I remember saying to myself: ‘This is a big deal. I’m proud of you. This is a big step in your growth. I’m a human, and I should be able to go on the bus in shorts if I want.’

As it happened, there were no seats and Reena had to stand. “I closed my eyes. I didn’t look for the stares. I did the breathing and said to myself, ‘I love and approve of myself.’”

If you’re not ready to show that much skin, Reena suggests starting small: “Maybe begin by wearing short sleeves for half an hour and bring a sweater. Meet yourself where you are instead of diving in headfirst.”

At times, Alisha, who shares her psoriasis story on AlishaMBridges.com, tries to tune in to the nuances. “I’m an intuitive person, so when I sense that a stare is coming from a place of curiosity or ignorance rather than malice, I might look at the person, chuckle, and say, ‘It’s just psoriasis. Are you familiar with that?’”

Reena admits that she used to “make it worse by continuing to spin through the reasons why a person might be staring” yet has also found curiosity to be a main driver. “Some people think I got burned or they ask if it’s painful.”

And Joni recalls when a colleague asked about the spots on her arms in front of others. “I was fairly new at this company, so I felt upset and embarrassed. But since all eyes were on me, I took a breath and explained, ‘It’s just psoriasis. It’s an autoimmune disease; it’s not contagious.’ Turns out, he asked because he’d struggled with eczema over the years and was wondering if I had the same thing.”

Look for the silver lining

For Joni, a director at an e-commerce ad agency, showing her psoriasis got her some desirable social distance long before COVID. “For years, I lived and worked in New York City, so the subway was part of my daily commute. This was a time when psoriasis spots were an advantage for me,” she remembers.

“If I was holding on to a pole and showing my spotty arms and hands, other riders often chose to stand elsewhere. Nothing was ever verbally spoken, but the stares and faces said enough.”

Gain strength from your psoriasis community

Linda now wears shorts and tanks and posts her skin-baring looks on Instagram @simplistic_lindz. By showing her plaques on social media, she’s met many others with psoriasis, including Reena. “She was one of my first followers,” says Linda, whose skin is about 80 percent covered right now. “She offered words of comfort, and helped me learn to embrace the skin I’m in.”

Linda says the online community is like a cheering squad: “Sometimes this condition may seem unbearable, but the people there make me feel worthy.”

Reena says her reaction to gawkers has evolved over the years. “Inside, I would get angry, thinking, What are you staring at? Now I take a breath and think, Okay, let them look. The only thing I have control over is my reaction, the way I respond.”

She takes inspiration from this quote by Austrian Holocaust survivor and philosopher Victor Frankl: “Between stimulus and response there is a space. In that space is our power to choose our response. In our response lies our growth and or freedom.”

“I love that; it empowers me,” says Reena. “It gives me an opportunity to respond to other people in a way that’s aligned with who I am.”

Getting Clear on Psoriasis

Having psoriasis isn’t easy. It can be physically and mentally challenging, causing uncomfortable symptoms and making you feel disconnected from loved ones and daily activities. But the right information, treatment plan, and support can make a big difference in your health and happiness.

Our podcast, “Getting Clear on Psoriasis,” is here to help. Host and psoriasis patient David Brandt guides listeners through important topics about living better with psoriasis. Each episode includes relatable insights from fellow patients and key information from leading dermatologists and other experts. Listen now.