And it starts with inflammation in the brain. 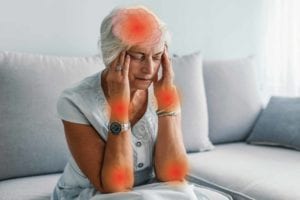 About 4 million Americans — mostly women — have fibromyalgia, a mysterious disorder that causes widespread pain, extreme fatigue, mood changes, and sleep problems. Despite fibromyalgia’s prevalence, getting correctly diagnosed can be tricky, in part because there are no diagnostic tests for fibromyalgia. Doctors aren’t even sure what causes it.

That may soon change, thanks to ongoing research. One recent but small study offers an intriguing possibility: that fibromyalgia may stem from inflammation in the brain.

The study, published in September in the journal Brain, Behavior, and Immunity, is the first to directly illustrate this connection. A research team with members from Massachusetts General Hospital, Harvard Medical School, and the Karolinska Institute in Sweden ran a hybrid imaging test (MRI/PET scans) on 31 patients with fibromyalgia and 27 control subjects who did not have fibromyalgia. The scans showed that people with fibromyalgia had substantially higher levels of a protein (TSPO) that’s made by a type of nerve cells called glial cells in several areas of the brain.

The researchers also found that TSPO was highest in patients who had the most fatigue.

“The activation of glial cells we observed in our studies releases inflammatory [chemicals] that are through to sensitize pain pathways and contribute to symptoms such as fatigue,” coauthor Marco Loggia, PhD, explained in a press release from Massachusetts General Hospital.

“We don’t have good treatment options for fibromyalgia, so identifying a potential treatment target could lead to the development of innovative, more effective therapies,” said Dr. Loggia. “And finding objective neurochemical changes in the brains of patients with fibromyalgia should help reduce the persistent stigma that many patients face, often being told their symptoms are imaginary and there’s nothing really wrong with them.”