Gout Risk Factors and Causes You Need to Know About

If you think gout is caused by an unhealthy diet or excess alcohol intake, you need to keep reading. 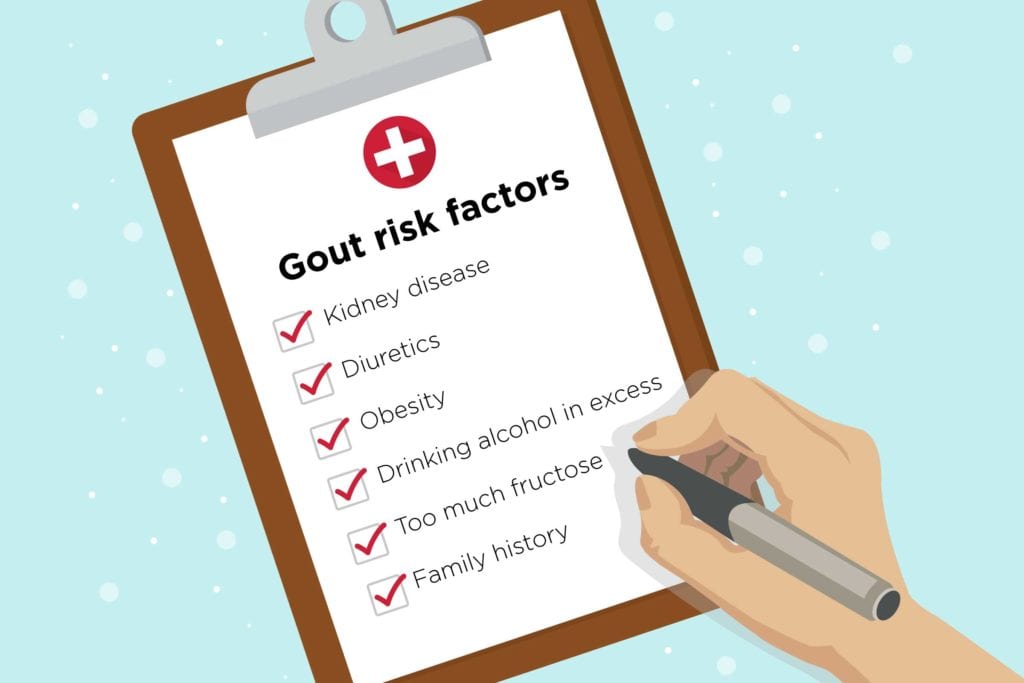 Gout, a type of inflammatory arthritis, usually strikes without warning. While other types of arthritis often cause mild symptoms that get progressively worse over the years, gout tends to first make its presence known by causing an extremely painful and unexpected “attack” on a joint (often the big toe). Learn more about other common gout symptoms here.

Although gout may seem mysterious to someone who was feeling fine before getting sidelined by the sudden pain and swelling, experts know quite a lot about why gout develops.

Uric Acid and the Onset of Gout

“Gout is caused by an elevation in the chemical uric acid,” says Kenneth Saag, MD, professor of medicine in the division of clinical immunology and rheumatology at the University of Alabama at Birmingham. “Uric acid builds up in the body and deposits in the joints, which causes a severe inflammatory reaction.”

Uric acid is a normal breakdown product of your body’s metabolism. Most of the time uric acid just gets eliminated in urine. When that process goes awry, however, excess uric acid forms crystals in one or more joints, says Joseph Huffstutter, MD, a rheumatologist with Arthritis Associates in Hixson, Tennessee. The body recognizes the crystals as foreign, so it attacks them.

Sometimes this uric acid build-up happens simply because of aging, since as you get older your kidneys (which filter waste into urine) can become less efficient, says Dr. Huffstutter. But that doesn’t mean that gout impacts only the elderly: Men are most apt to develop gout between age 30 and 50; for women, gout is more common after menopause (which usually occurs in the early fifties).

Age aside, there are several other risk factors that can increase your chances of developing this painful condition.

If you have kidney disease, there’s a one in 10 chance that you’ll also end up with gout, according to the American Kidney Fund. This relationship can go both ways: If you develop gout first, small uric acid crystals can pass through your kidneys and damage them in the process.

Many people with kidney disease, especially in the early stages, don’t know that they have it. If you have gout, ask your doctor if you should be tested for kidney disease. Learn more about how other kinds of arthritis affect your kidneys.

High blood pressure, or hypertension, can be controlled with different types of medication, but diuretics are a popular choice. Sometimes called “water pills,” these drugs prompt your kidneys to flush out extra fluid, which can help bring down blood pressure by reducing the total volume of blood moving through your veins and arteries. The catch, however, is that having less fluid makes it harder to dissolve substances, including uric acid. That’s why people who take diuretics face a higher risk of gout, says Dr. Saag.

People who are obese are also more apt to develop diabetes, and those with diabetes are more prone to gout (and vice versa).

Beer, wine, and spirits are all high in purines, natural substances that turn into uric acid when your body breaks them down. People who consume a lot of alcohol face a higher risk of gout, as do those who eat many high-purines foods like red meat and shellfish. Here are the high-purine foods you should avoid if you have gout.

That said, if you already have gout, changing your diet alone probably won’t cut it. “While we encourage people to limit excessive amounts of foods like red meat and shellfish, dietary changes by themselves will generally not be sufficient to bring uric acid levels down in someone who’s already developed gout,” says Dr. Saag.

Gout Risk Factor: Too Much Fructose

Consuming a lot of fructose, a type of sugar, has also been tied to an increased risk of gout. Research has suggested that men who consume a lot of regular (non-diet) soft drinks are often at risk because these beverages are loaded with high-fructose corn syrup. Drinking a lot of fruit juice may also be problematic.

If your mom or dad had gout there’s a better than average chance that you’ll end up with it too. “There may be more subtle genetic variations in terms of how the body gets rid of uric acid,” and you might have inherited one of them, says Dr. Saag.

If you think your foot pain or other symptoms could be gout, see a health care provider. It’s very important to go during a flare, so your doctor can look for uric acid crystals in the joint to confirm the diagnosis. If you don’t treat gout, flares can become more frequent, spread to other joints, and cause tophi, hard lumps that form in the joint. Gout that goes untreated and persists for years could lead to chronic gouty arthritis and cause permanent joint damage, deformity, and persistent pain.