Gluten-Free Diet and Arthritis: Does It Help Improve Symptoms?

Some arthritis patients swear that ditching gluten has helped their joint pain; others haven’t seen any impact. So what does the research say about gluten, inflammation, and arthritis? 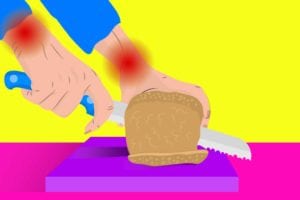 Ask people with inflammatory arthritis their thoughts on following a gluten-free diet, and you’ll hear some strong opinions.

For some, the results of following a gluten-free diet have been impressive: “I’ve given up my handicap placard and my cane. My psoriasis has gone completely [away] as well. When I eat gluten, my pain comes back — as does my psoriasis,” Kelly G. told us on Facebook. Marjorie W. says that her hands feel much better since eliminating bread, cake, and pastries. “When I indulge, swelling, stiffness, and pain return,” she says, noting that she’s also filling her diet with ample fruits and vegetables.

While many CreakyJoints members have been pleased with a switch to a gluten-free, just as many reported that cutting out gluten hasn’t improved their arthritis symptoms. Eliminating gluten made no difference for Sue D., whose friend suggested she start a gluten-free diet. Pam E. says that going gluten-free was “the best thing I’ve ever done for myself” — but only because it decreased her GI distress; it didn’t seem to affect her joints.

Gluten has earned a reputation for promoting inflammation and causing a host of health problems. In turn, going gluten-free has been perceived by many in the chronic illness community as a panacea — particularly because it’s a “natural” approach. As such, many arthritis patients have adopted a gluten-free diet, though to mixed success.

Could eliminating gluten help improve inflammation and arthritis symptoms? The idea doesn’t come out of nowhere. “Celiac disease can cause arthritis-like symptoms, so from that standpoint, it makes sense that following a gluten-free diet could help [people with arthritis],” says Micah Yu, MD, a board-certified internal medicine physician and rheumatology fellow at Loma Linda University Medical Center in Loma Linda, California.

There’s also a link between celiac disease and inflammatory arthritis: Data show that people who have rheumatoid arthritis are at a greater risk for celiac, and research also suggests that those with celiac are at a higher risk of later developing RA or other autoimmune disorders. In one 2017 Italian study, 35 percent of people with celiac also had another autoimmune disease, compared to a rate of 15 percent of those without celiac (the control group).

But just because cutting out gluten appears to help some people with arthritis doesn’t necessarily mean it’s right for you. Here, we looked at the latest studies on gluten and talked to rheumatology and GI experts for their take on whether going gluten-free is beneficial to people with arthritis.

Gluten is a protein found in certain grains such as wheat, barley, and rye. While it’s necessary for those with celiac disease — who have an autoimmune response to gluten that causes GI symptoms — to stop eating gluten, many people allege that gluten can also cause problems in people without celiac.

One argument is that gluten can cause inflammation even if you don’t have celiac disease, which can worsen symptoms for those with arthritis.

Celiac is an autoimmune disease. For those with celiac, eating gluten triggers an immune response in the body that attacks the lining of the small intestine, causing GI symptoms such as diarrhea and bloating as well as dangerous nutrient deficiencies from not absorbing vitamins and minerals from your food. Celiac disease patients are treated with a strict gluten-free diet.

On the other hand, there’s another increasingly recognized condition called non-celiac gluten sensitivity (NCGS). “These patients come in with fatigue, joint pain, swelling, muscle pain. The diagnosis is one of exclusion. The doctor runs labs for celiac; when the results are negative but the patient improves from eating a gluten-free diet, that’s what we call NCGS,” explains Dr. Yu.

It may be the case that some people who have inflammatory conditions like rheumatoid arthritis or psoriasis have non-celiac gluten sensitivity.

Does Gluten Cause Inflammation or Joint Pain?

The short answer is possibly, but no one knows for sure why this could be the case.

It’s first helpful to understand what causes inflammation in people with celiac disease when they eat gluten. The human leukocyte antigen (HLA) complex is important here. HLA is a group of genes that helps the immune system distinguish your body’s own proteins and ones made from foreign invaders, such as bacteria and viruses. If the latter happens, it triggers inflammation.

There are many different variations of HLA genes, which are involved in various immune-related diseases, including celiac, rheumatoid arthritis, psoriasis and psoriatic arthritis, ankylosing spondylitis, and others. For instance, people who carry two specific variants of HLA are at an increased risk of celiac; those who carry different HLA variants are more at risk of developing other diseases. While having a certain HLA genetic variant doesn’t guarantee you’ll get an autoimmune disease, it does increase your risk.

It’s thought that these HLA genes play a role in what happens to people with celiac when they eat gluten. During digestion, gluten breaks down into proteins called peptides, which enter the superficial layer in the small intestine, explains Gauree Konijeti, MD, a gastroenterologist with Scripps Clinic Torrey Pines in La Jolla, California explains. When people with celiac disease eat gluten, their immune system recognizes the gluten peptides as foreign and mounts an attack that causes inflammation in the intestine.

But it’s not yet clear how eating gluten could trigger an inflammation response in those without celiac, says Dr. Wu.

Arthritis and Gluten: What the Science Says

There’s not a wealth of evidence showing that following a gluten-free diet could improve arthritis symptoms. A 2001 study published in the journal Rheumatology followed about 20 patients each as they embarked on a gluten-free vegan diet or a non-vegan diet for one year. At the end of the study, more of the people in the gluten-free vegan group experienced an improvement in symptoms (nine people) compared to the non-vegan group (just one). Keep in mind that there was more going on in this study than gluten or no gluten: the group that saw the benefit was also eating a vegan diet, which also eliminates animal proteins like meat and dairy. It was also an incredibly small sample size.

A later review study published in Frontiers in Nutrition in 2017 analyzed various clinical trials (including the one mentioned above) that looked at how dietary changes may affect rheumatoid arthritis symptoms. The studies in which people followed gluten-free diets also used gluten-free vegan or vegetarian diets, which means that experts couldn’t tease out the impact of gluten alone. Based on the available research, the authors lay out an ideal anti-inflammatory diet for people with arthritis: fruits, legumes, spices, herbs, oils, yogurt, and whole grains, including those that contain gluten, like whole-wheat bread, rye, and barley.

Bottom line: In the absence of a celiac disease diagnosis, there’s not enough evidence to suggest that people with rheumatoid arthritis go gluten-free, per a review in the July 2019 issue of Digestive Diseases and Sciences.

Gluten vs. Other Potential Causes of Inflammation from Diet

Consider that going gluten-free in and of itself doesn’t guarantee you’re eating a healthy diet. “As a result of going gluten-free, you may shift your diet to a healthier pattern by eating more fruits and vegetables, but many people don’t,” says Dr. Konijeti. There’s an entire industry of highly processed gluten-free foods. In other words, gluten-free doesn’t mean nutrient-dense.

There’s also the idea that the “bad guy” gluten may not be the real or only culprit. People may feel better removing gluten-containing foods because they are eliminating something in those foods other than or in addition to gluten.

Many foods with gluten also contain other compounds known as FODMAPs, which is an acronym for different types of carbohydrates (fermentable oligosaccharides, disaccharides,
monosaccharides, and polyols) found in dairy, certain fruits and vegetables, grains, and sugars. Lactose is a FODMAP, for example. According to review published in JAMA in 2017, “the reduction of FODMAPs associated with the gluten-free diet may explain, at least in part, why some patients affected with irritable bowel symptoms may report amelioration of their symptoms after starting a gluten-free diet.”

The Best Diet for Arthritis

The doctors we spoke with emphasize eating an anti-inflammatory diet with their patients. “A whole food, plant-based anti-inflammatory diet is my first-line recommendation,” says Dr. Yu. He counsels patients to cut out processed foods and refined sugar, and increase their fiber intake through fruits, vegetables, and whole grains, regardless if those whole grains contain gluten or not.

Other doctors advocate for a similar diet. Nilanjana Bose, MD, a member of the American College of Rheumatology, who practices at the Rheumatology Center of Houston, recommends a Mediterranean diet that restricts refined carbs and sugars, as well as red meat.

The benefits pay off across the board. “People who follow a low-carb anti-inflammatory diet lose weight and see their energy, sleep, and joint symptoms improve,” she says. Like Dr. Yu, she says that much of the success with an anti-inflammatory diet comes from improving the health of the microbiome, the network of trillions of bacteria in your gut.

“There’s been a lot of interest in the gut microbiome. We feel that some of these gut organisms may be promoting inflammation and there are some good gut organisms that decrease inflammation,” Dr. Bose explains.

It’s when this balance of gut bacteria is off that GI symptoms appear — and it may be one underlying trigger of autoimmune disease, she says. “Cleaning up your diet can help the gut reset. But you can do that without going gluten-free,” Dr. Bose adds.

If you’re not getting any results from following an anti-inflammatory diet after two months, Dr. Yu suggests exploring a gluten-free diet on the chance that you also have an underlying gluten sensitivity as well.

Know that if you cut out gluten without notifying your health care team first, you are going on a fairly restrictive diet. In the absence of a condition that warrants a gluten-free diet, you may be doing this unnecessarily.

If you have celiac disease symptoms, ask your doctor if you should be checked for celiac. You should do this before you cut out gluten. In order for blood tests to accurately test for celiac, you need to be currently eating gluten-containing foods.

Keep in mind that any diet changes you make should be part of an overall treatment plan you develop with your rheumatologist. It’s rare that people with inflammatory arthritis can improve symptoms, stop disease progression, and prevent long-term joint damage with diet changes alone. Prescription medications are often at the core of treatment due to the strong evidence supporting their success.