The seriousness of the gout and kidney disease connection shows the importance of getting gout under control. 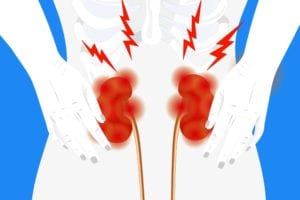 Your kidneys, which filter waste from your blood to make urine, might not seem like they have much to do with gout, a form of arthritis that is best known for causing excruciating pain in the big toe as well as these other gout symptoms. But when you dig into what causes gout, the important connection starts to make a lot of sense: Gout happens when uric acid builds up in the body and crystallizes in the joints.

Well-functioning kidneys should filter out uric acid and prevent gout from happening. That explains why one out of 10 people with chronic kidney disease develop gout.

The reverse is true, too: If you have gout, you’re more apt to develop kidney disease, probably because too much uric acid in your blood over-taxes your kidneys as they attempt to filter it out.

While health experts already know about the link between gout and kidney disease, even they may be surprised to learn just how dangerous it can be. According to a new study, published in the journal Arthritis & Rheumatology, people with gout are almost 80 percent more likely to die from kidney disease compared to those who do not have gout.

The researchers, who relied on data from a health registry in Sweden, identified nearly 20,000 people who were newly diagnosed with gout between 2003 and 2013, then compared them to people of the same age and sex in the general population who did not have gout. They then used information from the Causes of Death Register to determine who in the study had died during that time period and from what cause.

According to their findings, gout patients were significantly more likely than those without gout to die from kidney disease. Digestive disease, cardiovascular disease, and infections were also relatively common reasons for death among those with gout.

“The novel finding of ~80 percent increased hazard of renal-related mortality [kidney-related death] among gout patients highlights the need for improved understanding and management of both gout and renal disease,” the authors wrote.