No, Gout Is Not a Trendy, Upper-Class Disease — Here Are 3 Key Facts You Really Need to Know About It

A recent ‘trend article’ on gout got a lot of things wrong. 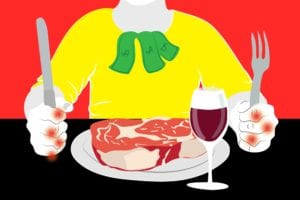 If you believe everything you read online, you may have heard that gout — a type of arthritis that causes painful attacks of swelling, redness, and tenderness in the joints, often affecting the big toe — is “making a comeback.”

That’s according to an article published on The Cut, which notes that recent mentions of gout in media, cinema, and pop culture continue to portray the disease — historically known as an affliction of kings and the wealthy — as one that signifies upper-class status and the ability to over-indulge.

The article itself was admittedly somewhat indulgent, but what got a bunch of us at CreakyJoints talking about the piece around the office was the information it left out.

Far more important than gout’s social cachet is “the issue that gout is extremely painful, disabling, and over time can be destructive of joints,” says Theodore Fields, MD, a professor of clinical medicine at Weill Cornell Medical College and an attending rheumatologist at the Hospital for Special Surgery in New York City.

We know from the thousands of gout patients in our arthritis community, as well as the numerous studies on gout that we’ve conducted through our ArthritisPower research registry, that gout is a serious disease that can have a huge impact on patients’ quality, and even quantity, of life.

While we’re glad that gout’s recent so-called “popularity” has a broader group of people talking about the disease, not all such conversations are productive. It’s critically important that articles contain accurate, thorough information and do not disseminate misleading or even harmful stereotypes.

The Gout Diet Myth That Needs to Be Cleared Up

The idea that gout is caused by one’s lifestyle and dietary choices, as The Cut article implies — and, in turn, can be primarily managed by food and lifestyle changes — is false.

“The cause of gout is genetics — if you are genetically predisposed to gout you may have a flare set off by certain foods, but if you are not predisposed you may eat them and never feel a gouty pain,” says Dr. Fields. “It is true that foods such as red meat, shellfish, and alcohol, especially beer, can set off flares of gout, but this happens in people who are genetically susceptible to the condition.”

In fact, a study recently published in the British Medical Journal found that one’s diet accounts for variation in blood uric acid levels (high uric acid levels in the blood indicate gout) by less than 0.3 percent, while genes explain 24 percent of the variation.

This means that the old trope of gout being caused mainly by unhealthy diet choices actually has very little medical basis. This fact is unfortunately not well understood by gout patients. In a survey conducted by CreakyJoints, 64 percent of gout patients felt responsible for causing their gout because of their diet and/or alcohol consumption. This misunderstanding has also led patients to incorrectly believe that gout can be managed primarily through diet changes.

It’s clear that there is confusion among both gout patients and the general population over the causes and treatment of gout, which can contribute to stereotypes and misinformation. Our goal at CreakyJoints is to make sure that people are receiving accurate and helpful information, so below are a few key take-aways on gout and its causes and treatment:

1. Gout Should Be Treated By a Health Care Provider

Regardless of whether or not gout is “trendy” in today’s culture, it is still a serious disease for which patients should seek regular medical attention. Gout patients should have their uric acid level measured by their provider regularly. They should also try to be as accurate as possible when reporting their gout attacks to their provider, so as to paint a complete picture of their disease activity.

2. Diet Is Not the Sole Way to Manage Gout

For most gout patients, the best way to prevent gout attacks and avoid long-term joint and bone damage, as well as other systemic health problems, is to take uric acid-controlling medication, such as allopurinol, which limits the amount of uric acid in the body.

But a study conducted by CreakyJoints and ArthritisPower found that while 85 percent of patients believe that high uric acid levels cause gout attacks, only 52 percent believe that taking uric acid-controlling medication is the best way to manage it.

What we at CreakyJoints want to emphasize is that your provider-prescribed medication keeps uric acid levels in your body at a healthy level, which prevents future gout flares and bone erosion, and therefore reduces the risk of future negative health impacts.

In addition to the swollen joints and bone damage that characterize gout, it is also often associated with serious comorbidities, such as chronic kidney disease, chronic heart failure, high blood pressure, and diabetes.

“In those patient populations in particular, the impact of gout on health outcomes can be quite severe,” says rheumatologist Kenneth Saag, MD, Jane Knight Lowe Professor of Medicine in the division of clinical immunology and rheumatology at the University of Alabama at Birmingham. “Gout is not just a nuisance disease of the wealthy, but a serious health condition of the poor and sick.”

Studies have found that gout patients are more likely to develop dementia, have a higher risk of hip and knee replacement, and face an increased risk of cardiovascular disease and premature death. The seriousness of gout, its long-term health effects, and the comorbidities with which it is associated should not be taken lightly and should be considered when discussing a treatment plan with your provider.

Throughout history, gout has often been referred to as the “disease of kings” because of the misconception that it is linked to an overindulgence in fatty foods and alcohol, but medicine has come a long way in its understanding of the disease.

Gout is a disease that affects more than 3 million people in the U.S. alone, according to data from the American College of Rheumatology. It’s time that our cultural perceptions catch up to science. This is especially important for gout patients who struggle to manage their disease and may feel as though they’re failing when lifestyle changes alone don’t work.

“If only reality TV and Hollywood equaled real life!” says Kim Mahaffey, a CreakyJoints community member of our Gout Patient Council. She scoffed at the idea of gout being portrayed as a new “it” disease in The Cut article. “Those of us with gout deal with finding the right medicine(s) to control it and that can take time and effort. We also must watch our diet as different foods affect our gout. Gout is extremely painful to deal with when it flares up and nobody wants it.”

Let’s make sure everyone understands that gout is a serious disease and should be treated as a serious disease — not a fad, and certainly not an unfortunate consequence of peoples’ over-indulgent life choices. “False ideas about gout, such as thinking diet is the whole story, need to be seen as the myths they are,” says Dr. Fields.

If you have gout and want to become an advocate to raise awareness of living with this disease, sign up to be part of our 50-State Network. You can also use our ArthritisPower app to track your gout symptoms.

Kelly Gavigan, MPH, is a data scientist at CreakyJoints. She has a Master of Public Health in Sociomedical Sciences and Global Health from Columbia University and has coauthored multiple research projects on gout.

Is It Safe to Go to a Hair Salon If You’re at High Risk for COVID-19?

Can Having Coronavirus Trigger Diabetes? Some Research Suggests Yes

COVID-19 in Australia: How I’ve Been Navigating Chronic Illness, Exercise Classes, and Advocacy from Home