A small initial study was promising, but more research is needed. 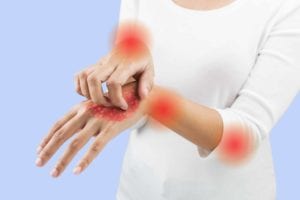 Up to 30 percent of people with psoriasis, an autoimmune skin condition, end up developing psoriatic arthritis (PsA), a kind of inflammatory, autoimmune arthritis that causes joint pain and damage. How to prevent developing psoriatic arthritis once you’ve been diagnosed with psoriasis? That’s a question experts are still studying, but recent research has indicated that using ustekinumab (Stelara) — a biologic medication that’s already FDA-approved to treat moderate-to-severe psoriasis and active PsA — might help.

Ustekinumab is an injectible medication that works by suppressing parts of the immune system and, in turn, keeping inflammation in check. In a recent study published in the journal Arthritis & Rheumatology, 23 people with psoriasis who also had signs of inflammation at spots where the tendons and ligaments attach to bone (entheses) were given ustekinumab.

Within 24 weeks, inflammation of the entheses had decreased dramatically (by 42 percent), and after a year of treatment it had declined by 47.5 percent.

Inflammation of the entheses is believed to be one of the first abnormal changes that occurs in people who are developing PsA. In this particular study, patients were not yet experiencing noticeable joint pain and inflammation; the inflamed entheses were detected solely via ultrasound.

This study suggests that it might be possible to stop psoriasis from advancing to PsA by detecting and treating inflammation of the entheses during the “subclinical” (not yet bothersome to patients) phase.

That said, the study has several limitations, namely that it was small and not designed as a randomized, placebo-controlled trial, so patients knew how they were being treated. The authors acknowledged that further research in this area is needed.

While there isn’t enough evidence at this point to warrant using medication for the sole purpose of avoiding PsA, there are some lifestyle changes that might make a difference too. Another recent study, presented at the 2018 meeting of the American College of Rheumatology, found that limiting alcohol and keeping your weight down seems to reduce the chances that someone with psoriasis will develop PsA.