The medication is already FDA-approved to treat psoriasis. 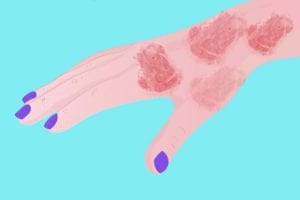 According to the American College of Rheumatology, most people with active psoriatic arthritis (PsA) should be on an anti-TNF drug to help prevent disease progression and manage their symptoms, though biologic drugs called interleukin inhibitors may also be a good choice. In fact, a recent study found that interleukin inhibitors including stekinumab (Stelara) or secukinumab (Cosentyx) work as well as anti-TNF drugs like adalimumab (Humira) for moderate to severe PsA.

The study, which was presented at the annual European Congress of Rheumatology (EULAR 2019) in Madrid, was a randomized trial that pitted tildrakizumab against a placebo for 24 weeks. (Some patients also continued using methotrextate or leflunomide throughout the study.) According to their findings, tildrakizumab “was significantly more efficacious than [placebo] in treatment of joint and skin manifestations of PsA. ”

Nearly 80 percent of those who received 200 mg of tildrakizumab every 12 weeks had a 75 percent reduction in their psoriasis severity score (PASI 75) compared to about 17 percent of those who used a placebo. Swollen and tender joint count also decreased in the intervention group.

“A promising role is suggested for tildrakizumab in the treatment of patients suffering with psoriatic arthritis,” said lead study author Philip Mease, MD, of Swedish Medical Center/Providence St. Joseph Health and the University of Washington, Seattle.

Tildrakizumab, a monoclonal antibody that targets a protein (interleukin-23), is currently FDA-approved in the U.S. for psoriasis but not psoriatic arthritis.