Drugs that block the immune system protein IL-17 may work better for clearing skin plaques than those that block TNF. 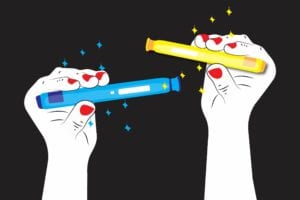 Most people with moderate to severe psoriatic arthritis (PsA) are advised to take a biologic drug to treat their symptoms and prevent disease progression, but which one? The 2018 guidelines from the American College of Rheumatology advise that patients with active disease start with a tumor necrosis factor (TNF) inhibitor over an interleukin (IL) inhibitor, but the authors noted that the available evidence for this preference was “very low.” Now a new study suggests that at least one interleukin inhibitor — ixekizumab (Taltz), which targets the immune system protein IL-17A — may be superior to the widely used anti-TNF drug adalimumab (Humira).

The study, which was published in the journal Annals of the Rheumatic Diseases, involved 566 patients who had been living with PsA for at least six months, had not responded sufficiently to a traditional disease-modifying antirheumatic drug (DMARD) like methotrexate, and had visible evidence of plaque psoriasis. The researchers randomly assigned half of the participants to start using ixekizumab and the other half to take adalimumab.

“Although skin involvement is usually mild in patients with PsA, clinicians and patients judge the impact of a PsA treatment by effects on all domains affected by the disease, in particular joints and skin. Furthermore, achievement of optimal health-related quality of life, the ultimate treatment goal in PsA, requires improvements in both joint and skin manifestations of the disease,” the authors wrote.

In a recent RheumNow podcast about the study, host and rheumatologist Jack Cush, MD, noted the “difference between these two [drugs] was really driven by skin response … suggesting that IL-17 inhibition may be equal to TNF inhibition in patients with psoriatic arthritis, but if the skin is a big issue, the IL-17s win, hands down, and may make the better choice.”