Understanding Rheumatoid Arthritis Drug Side Effects: What Every RA Patient Should Know

Do pharmacy inserts, drug ads, and internet chatter have you scratching your head, feeling overwhelmed, or flat-out panicking? Help is here. 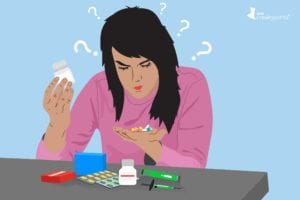 When some people get a prescription from a doctor, they fill it and start taking the medication without a second thought. Others fear taking medication and try to avoid doing so at all costs, despite living with a chronic, progressive disease like rheumatoid arthritis (RA), where medication is considered a critical cornerstone of treatment. The best place to land, of course, is somewhere in the middle.

All drugs have the potential to cause side effects, so you should have some concerns about any medication you’re prescribed or take over the counter. At the same time, it’s a grave mistake to leave your rheumatoid arthritis symptoms untreated. Medications for RA help prevent serious joint damage and disability.

While any drug carries some risk of side effects, many patients don’t consider the very real “side effect” of untreated RA that progresses, causing joint damage as well as other comorbidities like heart disease and lung disease.

How to strike the right balance? It comes down to weighing the potential risks and benefits of a treatment, though it can be hard for patients to get a grip on exactly how big a risk is involved from taking any given medication.

We posed these very questions to experts and asked them to share what they wish patients knew about rheumatoid arthritis drug side effects. Here’s what you need to know.

What Is a Drug Side Effect?

Side effects, which are sometimes called adverse events, include anything that’s unwanted or unexpected that happens to someone after they take a medication. Both over-the-counter (OTC) drugs and prescription drugs may cause side effects, though patients tend not to worry about OTC drugs as much, says Kathryn Dao, MD, associate director of clinical rheumatology at Baylor Research Institute in Dallas, Texas. That isn’t necessarily wise, because OTC drugs can cause significant side effects.

Many RA patients take OTC pain relievers such as ibuprofen (Advil) or acetaminophen (Tylenol), which may cause minor side effects such as stomachaches. But there can also be major side effects, especially when these drugs are taken in large doses, for long periods of time, or along with other medications. NSAIDs like ibuprofen could cause GI bleeding or kidney damage. Too much acetaminophen could cause liver damage.

Prescription drugs also have the potential to cause a wide range of side effects, from annoying to life-threatening. Disease-modifying arthritis drugs, for instance, may increase your risk of catching an infection. While serious infections definitely do arise, that’s not the norm, says Dr. Dao.

“People think about being hospitalized with pneumonia when they read that a drug may increase infection risk,” she says. But most of the time “patients encounter only mild infections like colds or minor skin or bladder infections. If a patient previously had a cold once a year, the immunomodulating drugs may slightly increase the rate to 1.5 to two colds a year.”

Read more about specific medication side effects in our Rheumatoid Arthritis Drug Side Effects Chart.

How Drug Side Effects Are Determined

Drug manufacturers are required to inform patients about all the possible risks that are associated with a drug — including those that happen rarely. That’s why medication package inserts and drug advertisements often contain a lengthy list of things that might go wrong.

The side effects that manufacturers warn you about primarily stem from what occurred in clinical trials that preceded a drug being approved by the U.S. Food and Drug Administration (FDA). Post-marketing studies (which are done after a drug hits the market) may also reveal new side effects over time.

The FDA also maintains an Adverse Event Reporting System that enables physicians, patients, and manufacturers to submit any perceived safety issues to the FDA. Side effects that are reported through that system may prompt the FDA to require the manufacturer to add additional warnings to a drug or possibly even pull it from the market.

What does this mean for you?

You can search the FDA’s database of Medication Guides to learn more about possible side effects of a specific drug. If you’re up for some not-so-light-reading, you can also search PubMed for the clinical trials published leading up to a drug getting approved by the FDA. Such studies provide details about how many people in each trial experienced a certain side effect, but that doesn’t necessarily indicate how likely you are to experience it.

Your age, sex, and other health problems you might have (such as diabetes, heart disease, etc.) are all important factors that could raise or lower your risk of experiencing drug side effects.

In general, Dr. Dao estimates that there’s less than a 10 percent chance that an individual patient will experience any side effect of any FDA-approved medication and that the chances of experiencing a serious side effect is less than 5 percent.

You should always talk to your doctor about your personal health history and lifestyle, and how those could affect your risk for certain drug side effects.

All drugs can cause side effects, but some drugs increase the risk of extremely serious problems, including severe injury, illness, or death. When such severe side effects are associated with a drug, the FDA often requires the manufacturer to add a black box warning (also called a boxed warning) to the drug’s label and highlight the warning by encasing it in — you guessed it — a black box. Many drugs used to treat RA carry black box warnings.

A black box warning doesn’t necessarily mean you shouldn’t take a drug, because it may still be the best option for you. This kind of warning should make you and your doctor pause and spend time discussing the risks and weighing them against the benefits that the drug might offer you before making a decision.

How to Monitor and Minimize the Risk of Side Effects

Side effects aren’t always preventable, but oftentimes doctors and patients can work together to minimize them.

“All the rheumatoid arthritis drugs have a pretty similar risk profile if you look at the overall risk of hospitalized infections, but there are differences in terms of which types of infections” they might predispose you to, says Kevin Winthrop, MD, a professor of infectious diseases and public health at Oregon Health & Science University in Portland.

With this information in mind, doctors can avoid prescribing certain medications to patients who are most apt to have problems with them. For example, Dr. Winthrop explains:

How many medications you take (and their dosages) matters, too. Taking multiple medications increases your chances of experiencing a side effect or interaction, which is why your doctor should know about everything you’re taking (including OTC drugs and supplements).

Even if you take only one drug, a lower dose may reduce the degree of side effects. Methotrexate, for instance, is often given to cancer patients in doses of 100 to 300 mg, says Dr. Dao. Rheumatoid arthritis patients typically take 10 to 25 mg.

“A patient may develop some side effects with methotrexate regardless of the dose,” says rheumatologist Vinicius Domingues, MD, CreakyJoints medical advisor. “However, the higher the dose, the greater are your chances of experiencing certain side effects, such as upset stomach and nausea.”

When it comes to methotrexate, Dr. Dao adds that taking a daily folic acid supplement can greatly reduce your chances of experiencing side effects such as hair loss, mouth sores, and liver problems. Here’s more information about how doctors monitor patients while taking methotrexate.

Drug Side Effects vs. the Placebo Effect

You’ve probably heard of the placebo effect, but here’s a quick refresher: A doctor gives you a pill and says it will make your knees feel better and they do — despite the fact that the pill (unbeknownst to you) contains sugar and not any pain-relieving medication.

A similar mechanism can apply to drug side effects, too.

“Before statins [cholesterol-lowering medication] came out, clinical trials showed that 10 to 20 percent of people who took them had muscle pain or weakness. Yet when statins hit the market, about one in three patients [or 33 percent] said they had this problem,” says Dr. Dao.

While side effects sometimes occur more frequently in the general population than in clinical trials, that doesn’t seem to be what happened here. “When more research was conducted and the drugs were blinded [patients didn’t know if they were getting a sugar pill or real medication], the risk of muscle pain or weakness was once again found to be 10 to 20 percent,” says Dr. Dao.

The takeaway: Side effects definitely happen, but worrying about them too much ahead of time might mean that you’re more apt to experience them.

Drug Side Effects vs. the Risks of Going Untreated or Undertreated

But choosing not to take medication for RA is incredibly dangerous. Long-term inflammation can permanently damage your joints and raise your risk of life-threatening conditions, such as heart and lung disease.

You need to ask yourself: What are the side effects of not treating my disease?

“People forget that the reason we prescribe these medications is because they have a disease,” she says. “The risk of a having a serious side effect is less than 5 percent. The risk of your disease progressing without treatment is about 100 percent. If I were a gambler, I’d put my money on being treated in order to prevent the devastating consequences of the disease.”

Dr. Winthrop adds that rheumatoid arthritis patients always have choices — lots of them. “Usually we discuss taking this drug versus that one. It’s not this one versus nothing,” he says.

Also important: If you start a drug and experience side effects, it’s not too late to stop or switch to another drug. Says Dr. Dao, “Patients need to know that just because we start a medicine doesn’t mean we can’t stop it.”

This article is part of a Patient’s Guide to Understanding RA Drug Side Effects and was made possible by a grant from Sanofi Genzyme.