Steroid injections are given to relieve joint pain, but new research shows they were also associated with OA progression. 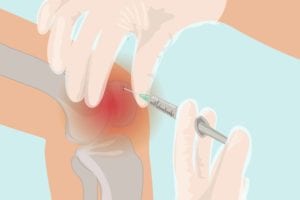 If osteoarthritis (OA) in your knee or hip is causing relentless pain and anti-inflammatory meds aren’t cutting it, it might seem logical to ask your doctor about getting a cortisone (steroid) injection. Putting this kind of medication directly into the painful joint can help relieve acute pain and inflammation without causing the kind of side effects that are associated with oral steroids (like prednisone) — or at least that’s been the prevailing wisdom. But a new study is throwing this common practice into question.

Doctors have long known that there are downsides to repeatedly injecting cortisone into the same joint, which is why they tend to limit the number of shots you can get in a given timeframe. But many patients and doctors have been working under the assumption that trying an injection or two can’t hurt. That may not be correct, according to the findings of new research published in the journal Radiology.

The study focused on 459 injections procedures that were performed at a Boston University clinic in 2018. The authors determined that 8 percent of patients (36 patients) experienced an adverse joint event that was confirmed with an imaging test.

The most common adverse joint event, which occurred in 26 patients, was accelerated osteoarthritis progression. The space between the joints had shrunk more rapidly than expected, thanks to cartilage wearing away more quickly.

“Recent reports and case series have suggested that certain preexisting conditions (older age, white race) may increase the risk for a negative joint outcome after [corticosteroid] injection,” the study authors wrote. They also suggested that patients considering joint injection might benefit from first having an X-ray to confirm that they aren’t already developing a stress fracture or osteonecrosis.

In an accompanying editorial, Richard Kijowski, MD, a professor at the University of Wisconsin School of Medicine and Public Health, noted that doctors must weigh the risk and benefits for each patient — but that this can be difficult to do because there’s very little solid scientific evidence proving that these injections help. A Cochrane review graded the available evidence as “low.”

The authors of the Radiology study also emphasized that further study of the benefits and dangers of steroid injections is warranted. “Given that [steroid] injections are increasingly performed to treat pain in patients with hip or knee OA, we suggest that the radiologic community should actively engage in high-quality research on this topic to better understand potential at-risk conditions prior to intervention and to better understand potential adverse joint events after these procedures to avoid possible complications,” they concluded.