New Guidelines for Treating Psoriatic Arthritis You Need to Know About

Here’s what medications doctors are likely to prescribe for PsA first. 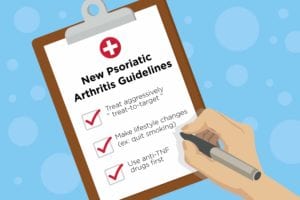 After spending years reviewing studies and conferring with physicians and patients, the American College of Rheumatology (ACR) and the National Psoriasis Foundation (NPF) have released guidelines outlining how to best manage psoriatic arthritis (PsA). PsA is an inflammatory form of arthritis that causes pain and disfiguration in the joints. It occurs in about 30 percent of people who have psoriasis, which is primarily an autoimmune skin condition. Because research on PsA has been relatively limited, most of the guidelines are considered “conditional,” so physicians will have to tailor treatment to individual patients and some trial and error may still be involved. That said, a few core guidelines apply to most PsA patients. These include the following:

The new psoriatic arthritis guidelines also include some recommendations for lifestyle changes to help manage PsA. The authors strongly recommend that current smokers quit, as cigarette smoke seems to interfere with the effectiveness of certain PsA medications (in addition to having other detrimental effects on the body). The full guidelines were published in the Journal of Psoriasis and Psoriatic Arthritis.