Psoriatic arthritis is linked with an increased fracture risk, but taking biologic medication can help. 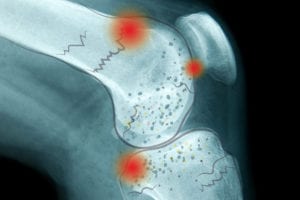 If you have psoriatic arthritis (PsA), you’re probably well aware that the disease often causes joint pain, swollen fingers and toes, and scaly skin plaques (if you also have psoriasis), but you may not realize that PsA could increase your risk of osteoporosis and bone fractures. The upshot: The same medication you take to treat your PsA might also protect your bones — assuming you’re using a biologic drug.

According to a new study, published in the journal Arthritis Research & Therapy, PsA patients who took a biologic drug (TNF inhibitor or interleukin inhibitor) had denser, stronger bones compared to those who only used methotrexate. The biologic-taking group also had better bone density when compared to a control population of patients with mild disease who were not taking any kind of disease-modifying drug.

Researchers said these findings were especially surprising considering that patients on biologics typically have psoriatic arthritis for many years and/or have high levels of disease activity. Not only can the disease cause more damage over time, but those with active disease are more apt to be using glucocorticoid drugs (in addition to biologics), and glucocorticoids tend to cause bone loss.

This study, which was conducted by researchers in Germany, included 165 patients with PsA, 34 of whom took methotrexate alone, 52 who used biologics, and 79 who did not take a disease-modifying drug. Those using biologics took the drugs for an average of four years.

The study authors described the results as “remarkable” but offered a plausible explanation: The same proteins (TNF and interleukin-17) that cause inflammation and damage in PsA lead to greater bone breakdown; taking biologic drugs specifically designed to target these proteins may stop or slow that process. Both TNF inhibitors and interleukin inhibitors appeared to work equally well for improving bone strength.

“We found the bone structure in [biologic]-treated PsA patients is not worse but even better than in the control population comprising patients with mild disease, indicating a specific beneficial effect of [biologics] on the bone,” the authors wrote. “Given that PsA is associated with increased fracture risk, fast and adequate neutralization of the key pro-inflammatory and bone-destructive mediators seems to be important to restore bone health and to limit fracture risk in PsA patients.”