88% of Arthritis Patients Say Achieving Remission Is a Goal, According to a New Poll

For patients, remission often means more function and less pain. Here’s what else you need to know. 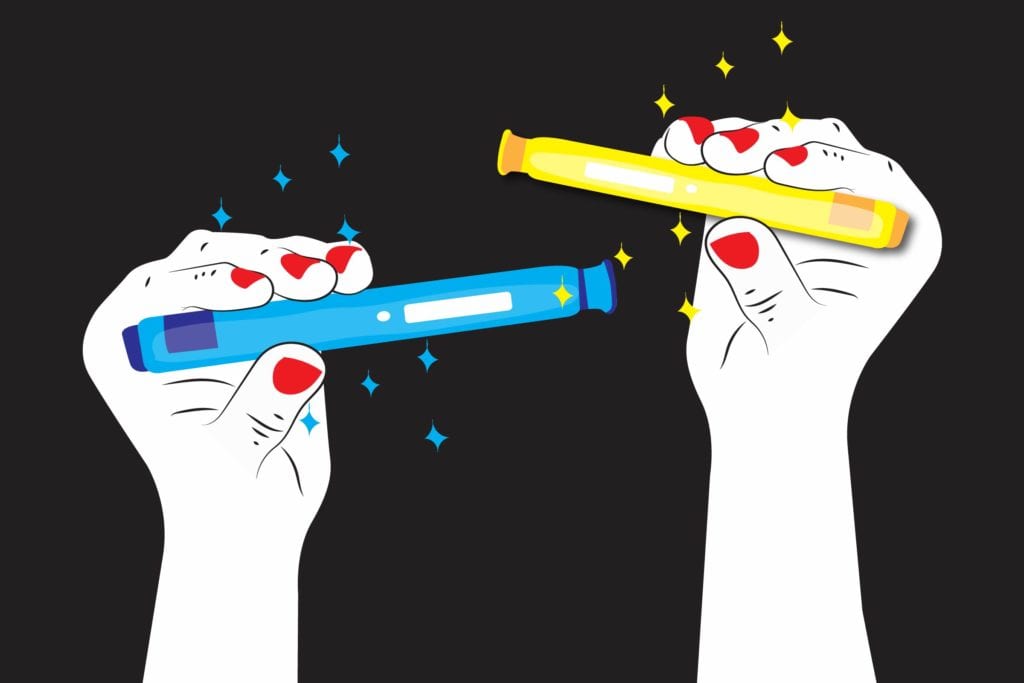 When you’re first diagnosed with an inflammatory form of arthritis such as rheumatoid arthritis (RA) — which is chronic and progressive — you have many questions about what’s next. Will my pain and other symptoms ever improve? What kind of long-term damage will the disease cause? What are the medications I’ll have to take (and what are the possible side effects)? Is disease remission possible?

When we asked members of CreakyJoints and ArthritisPower, our patient-powered research registry, in a recent Community Poll if achieving remission was a goal for them, 88 percent of 1,505 respondents said yes.

Decades ago, remission wasn’t conceivable for most patients, but thanks to advances in treatment, a proliferation in treatment options, and a more focused “treat to target” philosophy among rheumatologists, getting to remission is a possibility for many patients. “Treat to target” means picking a disease management goal (such as low disease activity or remission) and working with your doctor to adjust your treatment plan as needed in order to meet that target.

According to a 2017 paper about sustained remission in RA, the goal of treatment has evolved in recent decades from managing symptoms to preventing disability and long-term damage to early and persistent remission.

If remission is a goal for you, don’t be shy about letting your rheumatologist know. Your chance of hitting remission is higher if you’re proactive about it.

While you may hear stories about people going into remission without medication, this is quite rare. Patients cannot rely on lifestyle or dietary changes alone to reverse the course of disease, though of course these are helpful to your overall health as part of the right medication plan.

Now that remission is a possibility for many patients with rheumatoid arthritis and other kinds of inflammatory arthritis, it’s important to educate yourself on what remission is, how doctors measure it, and how to stay there once you’ve achieved it. Read on for some important information about remission. 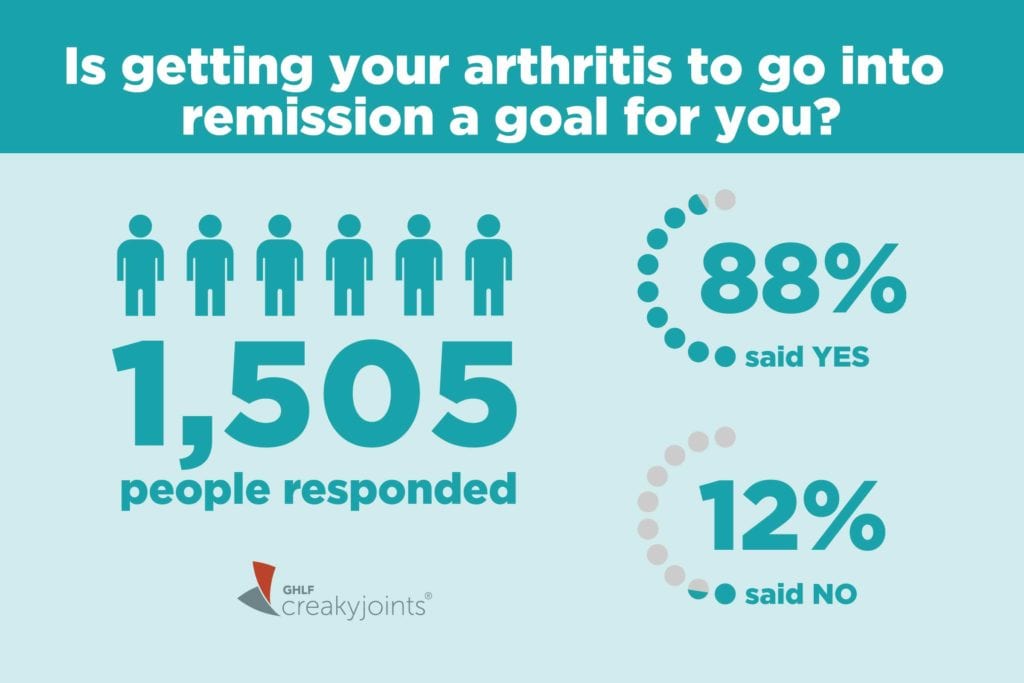 1. Doctors and patients together determine when a patient has achieved remission

Doctors have different ways to evaluate whether your disease is in remission. The one most commonly used in office settings is called the DAS-28, says CreakyJoints medical advisor Vinicius Domingues, MD.

DAS stands for disease activity score, and 28 stands for the number of joints doctors evaluate. The DAS-28 looks at how many of your joints are swollen and how many are tender (in pain). It combines this with the results of a blood test that measures inflammation, such as C-reactive protein or erythrocyte sedimentation rate (ESR), as well as patient ratings of their own pain and function. It then plugs these numbers into an algorithm to determine an overall number on a scale between 2 and 10.

The formal definition of remission using DAS-28 is less than 2.6. This indicates that your level of inflammation is low and your disease is less likely to cause underlying damage to your joints and other organs.

“I try to make analogies to help patients understand ‘absence of inflammation’ in remission, like ‘putting the fire out,’” says Dr. Davis. Dr. Domingues describes RA in remission as being dormant, asleep, or hibernating.

“It is important to get the patient’s perspective on what remission might mean to them. This can help get the patient and provider on the same page. I indicate this often means no pain, no joint swelling, good sleep, improved energy and vitality, and getting back to usual activities. But RA is a diverse disease process, and patients can be affected differently, hence it is important to get the individual’s perspective,” says Dr. Davis.

You can use our ArthritisPower app to track your symptoms and disease activity and share your results with your doctor. This information can be very helpful when discussing remission with your doctor.

While you have a lot of information to process after you’ve just been diagnosed with a disease like rheumatoid arthritis, it’s important to move swiftly and start medication to increase your chances of getting to remission. Research shows achieving remission is less common among people with long-established disease.

“In large cohort studies, the frequency of remission at a given time is around 20 percent. It is known to be easier to achieve remission using intensive, ‘treat-to-target’ treatment strategies using today’s medications. Such patients may achieve remission up to 50 to 70 percent of the time,” says Dr. Davis.

3. You can still have flares and pain while you’re in remission

Being in remission in RA doesn’t necessarily mean you no longer have pain or discomfort. You can have intermittent bouts of flares or pain while you’re in remission. “Often a short course of steroids can be enough to stop the flare, and then you go back to a cycle of maintenance,” says Dr. Domingues. “It is common, and patients should not be discouraged about that.”

Also, co-occurring diseases are common among inflammatory arthritis patients, notes Dr. Domingues. If patients have disease activity scores that indicate low levels of inflammation and few affected joints, but are still experiencing pain, this could indicate other diseases such as fibromyalgia or osteoarthritis. “We need to understand exactly the culprit for your pain, because the treatment is very different for fibromyalgia than for rheumatoid arthritis than for osteoarthritis,” Dr. Domingues explains.

This is the biggest misconception Dr. Domingues hears about remission. “We need to understand that rheumatoid arthritis is a chronic condition that, as of 2019, there’s no specific cure for. We have great treatment, but we don’t have a cure,” he says.

Translation: Going into remission doesn’t mean you will stay there indefinitely. These diseases are like a roller coaster, says Dr. Domingues. “Sometimes we go up, sometimes we go down. There’s a lot of unpredictability about that, but medications are the cornerstone to try to maintain it.”

5. Remission may mean you can taper your medications, but not always

If you go into remission, you may want to see if you can change your medication regimen to lower your dosages or take fewer medications — or see if you can stop taking medication altogether, even if temporarily. Some people refer to this as a “drug holiday.” It’s natural to want to reduce your medications, given that all drugs come with side effects and expenses. But whether you can actually remain in remission while tapering or stopping medication is something rheumatologists are actively studying. As of now, doctors don’t have a good way of predicting who will be able to stay in remission after reducing or stopping medication and who won’t.

Stopping medication not only means risking that you could fall out of remission and experience pain and other arthritis symptoms, but also means that the same medications might not work as well if you need to restart them in the future.

Being in remission means less inflammation throughout the whole body, which can have protective effects on other organs, such as your heart. Rheumatoid arthritis raises your risk for heart disease and heart attacks, but achieving and sustaining remission can help lower such risks.

RA and other inflammatory arthritis can also cause permanent joint damage when inflammation remains high. “From a joint perspective, you’re sparing destruction if you are in remission,” says Dr. Domingues.

7. Your lifestyle habits can affect remission, too

While the right medication plan is often the most important part of getting to and staying in remission, other factors can play a role as well. A studypresented at the annual meeting of the American College of Rheumatology in 2018 found that for women, being obese more than doubled the risk of not achieving remission within 12 months. For men, current smokers were 3.5 times less likely to reach remission. Stress may play a role too, says Dr. Domingues, who advises trying to be aware of your stress levels and when they feel out of control for you. “It’s easy to say, hard to do,” he acknowledges.