This is important news since type 2 diabetes and gout have many risk factors in common to begin with. 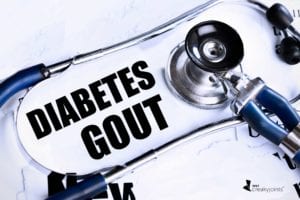 People with type 2 diabetes are more likely than average to develop gout, though it’s not clear if it’s the diabetes itself or other common risk factors like obesity and hypertension that explain the connection. While lifestyle changes — like cutting back on salt and reducing calories in order to lose weight — may help a type 2 diabetes patient lower their chances of ending up with gout, it appears that the drugs used to treat diabetes might also tip the balance one way or the other.

According to a new study presented at the 2019 American College of Rheumatology/Association of Rheumatology Professionals Annual Meeting in Atlanta, people with diabetes who took a drug in the GLP1 agonists class were more apt to develop gout compared to those who used an SGLT2 inhibitor instead.

GLP1 agonists are injectible medications that mimic a hormone called glucagon-like peptide-1, which prompts the pancreas to make more insulin. GLP1 agonists include exenatide (Byetta), liraglutide (Victoza), and dulaglutide (Trulicity), among others.

SGLT2 inhibitors are oral medications that lower blood sugar by causing more of it to be excreted in urine. They include canagliflozin (Invokana), dapagliflozin (Farxiga), and empagliflozin (Jardiance).

This study, which used data from more than 100,000 patients with type 2 diabetes who were in an insurance database and prescribed one of these two classes of medication between 2013 and 2017, determined that the risk of gout — a painful type of inflammatory arthritis — was significantly higher among those who used a GLP1 agonist. The research does not prove that drugs in this class cause gout, but the connection may be worth exploring further.

Read more here about gout comorbidities, including the link between type 2 diabetes and gout.

Is It Safe to Eat at a Restaurant If You’re at High Risk for COVID-19?