How well you can make a fist or squeeze someone else’s hands could reveal a lot about your own health. 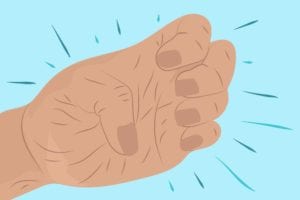 If the joints in your hand have recently started aching, it’s natural to worry about why. Are they just over-taxed, or could you be developing progressive autoimmune condition like rheumatoid arthritis (RA)?

In 2017, the European League Against Rheumatism (EULAR) stated that seven factors can help doctors determine which patients with arthralgia — joint pain without other obvious arthritis symptoms — were most likely to progress to RA. Those factors include morning stiffness and family history of rheumatoid arthritis.

Difficulty making a fist is also on that list of early RA risk factors, but according to authors of a new Annals of the Rheumatic Diseases research letter, there hasn’t been much scientific evidence proving that it’s a useful tool for predicting RA.

To find out whether one’s inability to completely make a fist can actually predict RA risk, the researchers reviewed previous studies, including one of more than 600 patients who had recently been diagnosed with small joint pain. At baseline participants were asked to try to close their fists all the way (with fingertips touching the palm).

Researchers also measured fist strength by having participants squeeze an assessor’s fingers. They then used MRIs to determine whether the inability to make a fist or weak fist strength was more common in people who had the kind of inflammation (tenosynovitis) in the hands and wrist that’s associated with RA. The found a strong correlation.

“Difficulties making a fist in recent-onset arthralgia… is considered a sign of imminent RA,” the authors wrote. “This is the first study providing scientific support for the predictive value of this sign.”