This Surprising Symptom Could Be an Early Clue for Lupus

About 35 percent of patients who were ultimately diagnosed with lupus had this less-obvious symptom, compared with just 14 percent of people who didn’t go on to have lupus. 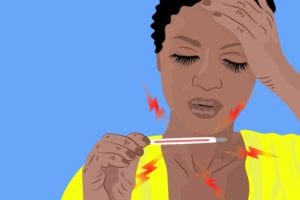 With no single diagnostic test and symptoms that are easily confused with a number of other ailments (like rheumatoid arthritis, fibromyalgia, and hypothyroidism), lupus can often take months or even years to diagnose. In an effort to speed up the process and get patients properly diagnosed and treated sooner, scientists have been looking for clues to help doctors differentiate early lupus from other conditions. One possible clue: unexplained fever.

In a recent multi-center trial, whose results were published in the journal Arthritis & Rheumatology, researchers reviewed data on 616 patients who had been referred to one of seven academic centers (in Asia, Europe, North America, or South America) within the previous three years because they were suspected of having lupus. Doctors at the individual centers ultimately diagnosed 389 of the participants with early lupus and 227 of them with a “lupus-mimicking” condition, such as undifferentiated connective tissue disease (UCTD) or Sjögren’s syndrome.

Not surprisingly, people who actually had lupus were more likely to meet several of the 11 standard criteria used to diagnose lupus, such as a butterfly-shaped rash on the face, sensitivity to light, and mouth or skin ulcers. But they were also more likely to have unexplained fever, which is not among the current diagnostic criteria. About 35 percent of the patients diagnosed with lupus had it, versus just 14 percent in the lupus-mimicking group.

Blood tests highlighted some key differences, too, as lupus patients were more likely to test positive for specific antibodies (ANAs, anti-dsDNA, anti-RNP, and antiphospholipid) that are associated with autoimmune disease. People with lupus were also were apt to have a positive Coombs’ test and to have hemolytic anemia, a condition in which the red blood cells are destroyed too quickly.

Members of both groups were equally likely to have a low white blood cell count, low platelet count, or anti-Ro/La antibodies.

“This study is an element in the item generation phase of an ongoing international effort to devise new SLE classification criteria with a focus on early disease,” the authors wrote. What kind of changes might be forthcoming? That’s still to be determined, but the authors of this study noted that when they added fever, hair loss, hypocomplementemia (a lack of proteins in a part of the immune system), and a positive anti-RNP test to the current diagnostic criteria for lupus, “accuracy in classification of patients improved significantly.”

Is It Safe to Go to a Hair Salon If You’re at High Risk for COVID-19?

Can Having Coronavirus Trigger Diabetes? Some Research Suggests Yes

COVID-19 in Australia: How I’ve Been Navigating Chronic Illness, Exercise Classes, and Advocacy from Home