Is There a Difference Between Having Ankylosing Spondylitis with Psoriasis and Psoriatic Arthritis with Back Pain? A New Study Says Yes

Having AS with psoriasis may have some things in common with psoriatic arthritis, but research shows these are two distinct conditions. 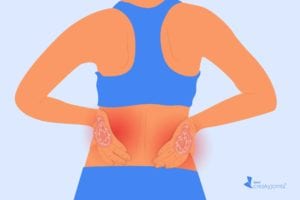 About 25% of people who have an autoimmune condition develop at least one more; some people live with three, four, or more. In fact, certain pairs of inflammatory diseases commonly occur together.

For one, people with ankylosing spondylitis (AS) (also known as axial spondyloarthritis) — which is best-known for causing chronic lower back pain — are also more likely to have psoriasis — an autoimmune disease that manifests in the form of scaly red and silvery skin patches. That combination might sound pretty similar to the autoimmune condition psoriatic arthritis (PsA), which, by definition, is a form of inflammatory arthritis that typically causes joint pain as well as skin plaques.

To further add to the confusion, PsA is considered part of the same family of rheumatic diseases as ankylosing spondylitis — they’re both considered types of spondyloarthritis, which is an umbrella term for a group of types of arthritis that have similar traits in common.

According to their findings, which appear in the journal Rheumatology, axial PsA is not, in fact, the same thing as AS plus psoriasis.

The researchers found that AS patients (with or without psoriasis) were more apt to be male, more likely to be positive for HLA-B27 (a genetic marker), and much more likely than those with PsA to report back pain as a chief complaint.

“AS patients, with or without psoriasis, seem to be different demographically, genetically, clinically, and radiographically from [axial PsA] patients. [Axial PsA] seems to be a distinct entity,” they concluded.