Ankylosing Spondylitis: Can It Cause Knee Pain?

When you think ‘ankylosing spondylitis,’ you tend to think: lower back pain. But you can have pain in peripheral joints like the knees. 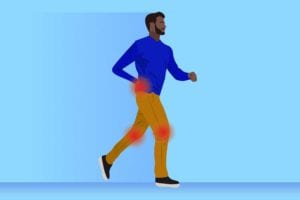 When you’re dealing with knee pain that won’t go away, you might blame it on overuse or age-related wear and tear. But in some cases, knee pain can come from a form of inflammatory arthritis such as ankylosing spondylitis (AS).

AS is known for causing inflammation, pain, and stiffness predominantly in the spine and sacroiliac joints (where the spine meets the pelvis). People often equate ankylosing spondylitis with lower back pain, but it can affect other joints, including the knees.

What’s behind the inflammation in ankylosing spondylitis? Your body’s immune system is releasing chemicals into your blood and joints that cause pain, stiffness, and eventually joint damage.

Compared with many other forms of arthritis, AS symptoms usually begin young — before age 45 — and often as early as the teens and twenties. Lower back pain is worse after inactivity or when you wake up; it often strikes in the middle of the night and prevents you from getting a good night’s sleep. AS can present as an ongoing, dull pain that feels like it is coming from deep within the lower back or buttocks. Because back pain is incredibly common, it’s easy for people with inflammatory back pain from AS to chalk up their symptoms to other issues, such as athletic or overuse injuries.

Ankylosing spondylitis (AS) is a type of spondyloarthritis (SpA), which is an umbrella term for different types of arthritis — including psoriatic arthritis — that have some traits and symptoms in common. There are two main types of SpA:

In axial spondyloarthritis, “the inflammation is more confined to the spine, and occasionally the shoulders and hips,” says Konstantinos Loupasakis, MD, a rheumatologist at MedStar Washington Hospital Center in Washington, D.C. “More distal joints, such as the knees, may also be affected although this is more commonly seen in peripheral spondyloarthritis.”

Within AxSpA, there are two categories:

A non-radiographic axial spondyloarthritis diagnosis can be made if the patient has sacroiliac changes on an MRI or is positive for the HLA-B27 gene (this gene gives instructions for making a protein that plays an important role in the immune system) with symptoms of inflammatory back pain (such as nighttime pain and morning stiffness, and improvement with physical activity), says Neal Birnbaum, MD, a rheumatologist, former president of the American College of Rheumatology, and founder of Pacific Rheumatology Associated Medical Group in San Francisco.

Peripheral spondyloarthritis means that inflammation and joint pain affects the limbs more than the spine. Sites include the knees, as well as the hands, wrists, elbows, shoulders, and ankles.

Despite formal classification of the spondyloarthropathies as above, in reality, people may have features of both axial and peripheral involvement, says Dr. Loupasakis. One recent study found that more than one-third of patients with axial spondyloarthritis also develop peripheral spondyloarthritis. Researchers studied more than 700 French patients from a group who had been diagnosed with early inflammatory back pain suggestive of AxSpA and followed them for five years. During that time, 36 percent developed arthritis in at least one peripheral joint — most often in the lower limbs.

How Does AS Affect the Knees?

Although AS is most common in the spine, any large joint can be affected — usually in an asymmetric distribution. This means that only one knee might hurt, as opposed to both knees. The pain is usually dull, often described by patients as soreness. It’s associated with stiffness that is worse in the morning and usually more intense after inactivity, he says. Pain and stiffness tend to improve with physical activity over an hour or more, Dr. Loupasakis says. The knee may feel warm to the touch and look swollen.

Still, how knee pain in AS feels is subjective and varies from patient to patient, says Erika Di Porto, DPT, MSPT, CI, department chairperson for the School of Health Sciences at Miami Dade College Medical Campus in Miami. “The joint hurts. The pain envelops the muscles, tendons, and the joints,” says Dr. Di Porto.

The pain in peripheral joints like the knee can be caused by arthritis (inflammation in the joint itself) or enthesitis (inflammation that occurs where tendons and ligaments attach to the bone), says Dr. Loupasakis. In arthritis, the knee can be swollen, warm, and tender. Enthesitis typically involves the Achilles tendons and the heels. But it can involve almost any part of the body at sites where tendons and ligaments attach to bones (front of the knees, pelvis, side of the hips or front of chest), he says. With enthesitis, the knee is not swollen but is tender to pressure, mostly at the front part around and below the kneecap.

If You Have Knee Pain Without a Formal AS Diagnosis:

Keep in mind that it’s rare to have knee pain due to AS without any other AS symptoms. If you or your doctor suspects you could have AS or peripheral spondyloarthritis, they will do more testing. This includes a blood test to see if you have the HLA-B27 gene, as well as blood tests to look for signs of systemic inflammation. The doctor may conduct different tests during a physical exam to assess your range of motion and flexibility in the spine and other joints. They may send you for imaging tests such as X-rays or MRIs. Read more here about how doctors diagnose AS and what to expect at the rheumatologist.

If You Have Knee Pain with a Formal AS Diagnosis:

If you already have an AS diagnosis, it’s possible that your knee pain could be due to AS, but it could also be due to a different health issue.

For example, someone in their twenties or thirties who is physically active may have an injury-related pain syndrome like tendinitis (inflammation or irritation of a tendon) or bursitis (a painful condition that affects the bursae, which are the small, fluid-filled sacs that cushion the bones, tendons, and muscles near your joints). Someone middle-aged is more likely to start to develop osteoarthritis in their joints — from age-related wear and tear — even if they also have a type of inflammatory arthritis.

A thorough physical exam, medical history, and various imaging tests as needed may be necessary to determine whether your knee pain is due to AS or a different health issue.

Treatment for AS Knee Pain

There is no cure for AS, but you can ease its symptoms and slow its progression. Symptoms of AS knee pain are treated in a similar way to AS-related back pain.

Patients with peripheral spondyloarthritis are usually first given a combination of nonsteroidal anti-inflammatory drugs (NSAIDs) to reduce pain and inflammation along with oral disease-modifying anti-rheumatic drugs (DMARDs) like methotrexate or sulfasalazine, says Dr. Loupasakis. Though NSAIDs are available over the counter, they can cause side effects such as stomach ulcers and kidney dysfunction, especially when taken for the long term and/or in high doses. You may also be prescribed topical NSAID creams or gels like diclofenac or salicylate cream that may be effective for enthesitis.

If you have axial disease, the biologics will usually help the peripheral disease, too, he says.

Biologics are medications — either given by IV infusion or injection — that target certain immune system proteins and pathways to reduce inflammation.

Steroid injections may occasionally be given in inflamed large joints in the knees to alleviate pain. “Steroid injections are not to be used more than three to four times a year in the same joint since excessive steroid use may accelerate cartilage thinning and be harmful to the joint,” says Dr. Loupasakis.

Cold therapy can provide relief for inflamed joints in the wrist. Cold constricts the blood vessels in the muscles, which decreases blood flow to the joint area to help reduce swelling and inflammation. Ice the joint and area for 15 minutes at a time to reduce inflammation, says Dr. Di Porto. Heat therapy warms the skin and the joints, which causes blood vessels to dilate, and sends more oxygen and nutrients to the joints and muscles. Try both and see which makes you feel best.

Hydrotherapy can also benefit patients with knee pain from AS, says Dr. Di Porto. Hydrotherapy uses water at varying temperatures for health purposes at a health center, spa, or at home. “It increases your flexibility and blood flow and loosens the tightness in your muscles,” says Dr. Di Porto.

Exercise for AS Knee Pain Treatment

Exercise, especially with help from a physical therapist, can also be key in keeping pain at bay. “Physical therapy is crucial to maintaining range of motion and preventing the development of contractures, where the joint gets stiff permanently,” says Dr. Loupasakis. Stretching exercises are also shown to be effective, he says. Check out these daily stretches for AS.

He recommends swimming or water exercises, since the water makes it easier to exercise with less strain on your joints. He also suggests postural training, where you learn how to maintain proper posture to help prevent you from developing stiff joints.

Surgery for AS Knee Pain

Surgery is a rarely used in the management of ankylosing spondylitis in the knee. It’s a last resort if knee joints are damaged to the point where daily activities become compromised, if your disease worsens, or you develop less motion and more pain. “You wouldn’t do a knee replacement until you’re at the point where symptoms are severe, your quality of life has been decreased significantly, and your activities of daily living are diminished,” says Dr. Di Porto.

The most common surgery if surgery is done is total knee arthroplasty, also known as knee replacement. Knee surgeries typically have successful and lasting outcomes. A study in the Journal of Bone and Joint Surgery evaluated the results in a group of patients with ankylosing spondylitis who underwent total knee arthroplasty. The surgery was found to give excellent pain relief and a durable fix at an average of 11.2 years postoperatively. However, since people typically have this surgery at a relatively young age, Dr. Di Porto says they’ll likely need a revision (another) procedure done.