If you or someone you sleep with has sleep apnea, you likely associate it with disruptive snoring and wheezing while they snooze. If you’re up on the latest science about the risks of sleep apnea, you may have read that... 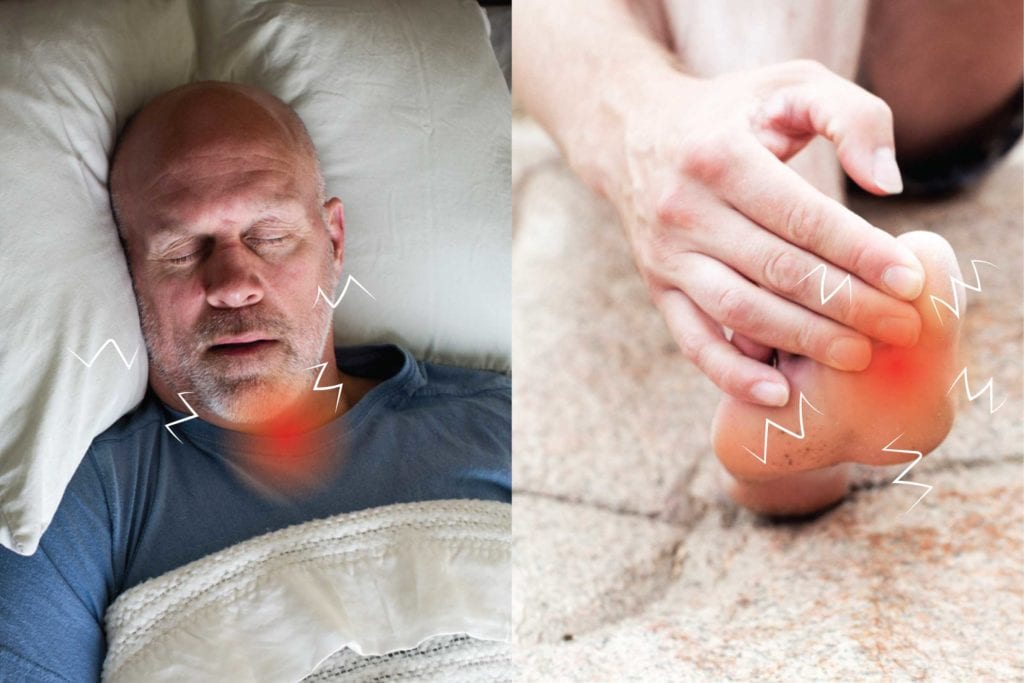 If you or someone you sleep with has sleep apnea, you likely associate it with disruptive snoring and wheezing while they snooze. If you’re up on the latest science about the risks of sleep apnea, you may have read that people with sleep apnea are also more prone to serious issues such as high blood pressure, type 2 diabetes, and more.

But people with obstructive sleep apnea are often known to also have high uric acid levels, a risk factor for the inflammatory disease gout. Although researchers have known that the two diseases share some risk factors in common — such as obesity and alcohol consumption — few studies have considered an association between sleep apnea and gout.

In a recent study published in the journal Arthritis & Rheumatology, researchers found that those with sleep apnea were at an increased risk of developing gout.

Milica Blagojevic-Bucknall, PhD, of Keele University’s Arthritis Research UK Primary Care Centre in the UK, and colleagues studied more than 15,000 sleep apnea patients and another 63,000 people without the sleep disorder, and followed them for about five years. They found that 4.9 percent of those with sleep apnea developed gout; while only 2.6 percent of people without sleep apnea were diagnosed with gout. (Another study from 2015, found that patients were at a 50 percent higher risk of gout the first year after a diagnosis of sleep apnea, MedPage Today notes.)

“The risk of gout was greatest between one and two years after the diagnosis of sleep apnea, but people remained at increased risk for as long as 10 years after diagnosis,” she said in an interview.

Surprisingly, the increased gout risk among sleep apnea patients wasn’t just among overweight people. In fact, the gout risk was greatest in those with a normal body mass index.

If you have sleep apnea, you should discuss these findings with your doctor, according to Dr. Blagojevic-Bucknall.

Explaining why there is an association between sleep apnea and gout is complicated, and more research is needed to better understand whether treating sleep apnea can help reduce gout risk, according to Dr. Blagojevic-Bucknall.

The most likely explanation: People with sleep apnea experience many small interruptions in breathing while they sleep, and this lowers the level of oxygen in their blood. This is thought to affect a process that elevates the production of uric acid in the body, which raises gout risk.

That raises the question of whether correcting that oxygen decrease, such as by using a breathing pump (called continuous positive airway pressure, or CPAP), could lower uric acid levels. “This could theoretically both reduce the risk of incident gout and treat existing gout,” said Dr. Blagojevic-Bucknall.