Here’s what you need to know about having a healthy pregnancy with PsA and AS. 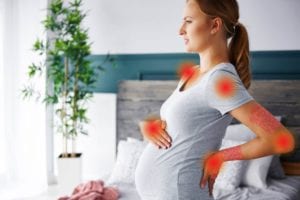 First, the good news: Women who have psoriatic arthritis (PsA) or ankylosing spondylitis (AS) usually have “favorable pregnancy outcomes,” according to a new study published in the journal Arthritis Care & Research. The authors, who followed 963 pregnant women — including 117 with PsA and 129 with AS — also found that disease activity in women with PsA or AS tends to remain stable throughout pregnancy.

That said, this study did add to the evidence that living with either of these types of inflammatory arthritis can make having a healthy pregnancy more challenging. The researchers found that women with psoriatic arthritis are more likely to require a Caesarean delivery compared to healthy women, and that they’re more apt to have a “moderate preterm delivery,” which means giving birth at 32 to 36 weeks.

Moderate preterm births aren’t as dangerous as “very preterm” ones that happen prior to 32 weeks, but can still cause problems. The earlier a baby is born, the more likely they are to have health issues. (In fact, the official classification of a full-term pregnancy has recently changed to reflect the importance of having ample time in the womb. “Full term” is now defined as 39 weeks to 40 weeks, six days. Babies born between 37 weeks and 38 weeks, six days, are now considered “early term.”)

Meanwhile, the researchers determined that women with ankylosing spondylitis were 67 percent more likely than healthy women to give birth to infants who needed to spend time in the neonatal intensive care unit (NICU).

While simply having an inflammatory disease may explain these increased risks, the authors noted that women with psoriatic arthritis or ankylosing spondylitis were more likely than those without autoimmune conditions to have additional ailments like asthma, diabetes, hypertension, or depression. They were also more apt to use tobacco or alcohol.

If you’re pregnant (or thinking about getting pregnant) and living with an inflammatory or autoimmune condition, it’s important to work closely with your rheumatologist as well as a maternal-fetal medicine specialist, which is an ob-gyn who specializes in higher-risk pregnancies. Your doctors should be able to advise you on how to best control your disease activity and answer your questions about what medications are safe for you to continue using.

For example, the American College of Rheumatology guidelines recommend avoiding systemic corticosteroids (with a few exceptions), yet this new study found that 38 percent of AS patients were exposed to these drugs at some point during pregnancy. “Our study found that second trimester corticosteroid use in AS was associated with an increased risk for preterm delivery,” the authors wrote.

On a positive note, they also found that “medication use including corticosteroids, non-biologic DMARDs, biologic DMARDs, and NSAIDs in the first or second trimester was not associated with an increased risk of preterm delivery among women with PsA.”