What Is Erosive Osteoarthritis? These Are the Signs You Could Have It

When hand arthritis symptoms strike fast and hard, you may have osteoarthritis with an inflammatory kick. 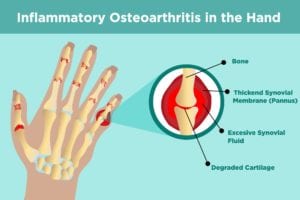 Wear-and-tear osteoarthritis (OA) of the hands affects tens of millions of Americans. More than half of people age 55 and older show signs of cartilage damage on X-rays, and more than one in 10 have arthritis symptoms, including pain and stiffness. But far less common is a lesser-known type of osteoarthritis called erosive OA.

This type of arthritis is found in about 3 percent of people over 55 and 10 percent of those with symptomatic hand OA. It can cause more pain and disability than other kinds of osteoarthritis and has so far resisted the search for a specific treatment. Here’s what you need to know.

What Is Erosive Osteoarthritis, Exactly?

Typical OA is characterized by loss of cartilage — a rubbery substance that cushions the ends of joints, providing for smooth movement — and degeneration in joints.

In erosive OA, however, imaging shows areas of bone damage (erosions) that start in the central part of the bone and create deformities with a distinctive shape. The condition is sometimes also called inflammatory OA because there are also signs of inflammation such as swelling, redness, and warmth of the joints.

Signs that your hand pain could be due to erosive osteoarthritis include:

The specific joints that are causing pain can also be an important clue.

“In erosive OA, the little joints at the tips of the fingers are almost always involved, though they are almost never involved in rheumatoid arthritis. In rheumatoid arthritis, the metacarpophalangeal (MCP) joint — the knuckle where the finger bones connect to the hand bones — are almost always involved, although they are almost never involved in erosive OA. The middle joints of the fingers can go either way,” says rheumatologist Allen Anandarajah, MD, associate professor of medicine at the University of Rochester Medical Center in Rochester, New York.

Erosive OA is more common in postmenopausal women, so your doctor may be more likely to suspect erosive OA if you’re in that group.

Your doctor will use your history, hand X-rays, and perhaps ultrasound or MRI to look for the distinctive erosions, lab tests (such as rheumatoid factor, which should be negative, and erythrocyte sedimentation rate, which is often normal), and the physical exam to tell whether you are likely to have erosive OA.

While there is local inflammation in joints affected by erosive RA, there shouldn’t be systemic inflammation the way there is with other kinds of arthritis, such as rheumatoid arthritis or psoriatic arthritis.

X-rays are important in the diagnosis of erosive OA because they can reveal specific types of changes to the bone that are characteristic of erosive OA compared with regular osteoarthritis or inflammatory arthritis. These include:

Ultrasound and MRI may also be useful at seeing soft tissue changes, such as inflammation in the joint, as well as other aspects of bone erosion.

It can be hard to differentiate erosive OA from regular OA. While some people consider it to be a form of OA, there is currently controversy over whether erosive OA should be a separate condition. The well-known differences are the severity of symptoms and the presence of erosions and soft tissue swelling in erosive OA, says Dr. Anandarajah.

People with RA are far more likely to have joints aside from their fingers involved, such as the wrists or elbows. As noted above, RA is also more likely to affect the knuckles of the hand than erosive OA is. The majority of people with RA test positive for rheumatoid factor or anti-CCP (about 30 percent of RA patients are considered seronegative, which means they don’t test positive for these antibodies); those with erosive OA should test negative.

Like RA, people with erosive OA frequently have synovitis, an inflammation of the synovial membrane lining the joint, but it is generally not as severe.

It can also be difficult to distinguish between other types of inflammatory arthritis, such as psoriatic arthritis (PsA). “The biggest difficulty is to tell the difference between erosive OA and psoriatic arthritis, which may have identical symptoms except for the skin disease in the latter,” says Dr. Anandarajah. However, some PsA patients develop psoriasis after arthritis symptoms; for others, the degree of skin disease is so small that they don’t even notice it or associate it with the joint symptoms.

Unlike with other types of arthritis, doctors can’t rely on a clear and established set of diagnostic criteria. “The latest classification criteria from the American College of Rheumatology for hand OA doesn’t talk about this subset,” says Dr. Anandarajah.

The lack of standard diagnostic guidelines can make it tough for clinicians as well as researchers who want to understand the condition better. When rheumatologist David Gazeley, MD, and his colleagues at the Medical College of Wisconsin analyzed published studies on erosive OA, they found that there was little agreement in the clinical features and X-ray findings used to define the condition.

“Some countries in Europe have recognized the condition for years, while countries like Japan have no terminology for erosive OA. The lack of diagnostic criteria for the disease has been a major impediment to research efforts,” says Dr. Anandarajah.

If you suspect you could have erosive OA, don’t wait to talk to your doctor. “While erosive OA is not an emergency, you should seek medical attention to make sure that you don’t have another form of inflammatory arthritis such as rheumatoid arthritis or psoriatic arthritis,” says Dr. Anandarajah.

Current EOA treatment options focus on controlling symptoms, although research is investigating whether inflammation-targeting therapies may help. Treatment may include:

Pain relief with NSAIDs and analgesics

Non-steroidal anti-inflammatory drugs (NSAIDs) and analgesics like acetaminophen, which are commonly used to treat regular osteoarthritis, are also first-line treatments for erosive OA.

One very small study from 2004 found that taking the supplement chondroitin sulfate in addition to an NSAID slowed the development of erosions, but it didn’t improve either the physicians’ or patients’ assessment of how they were doing.

Injections of inflammation-easing steroids into affected joints (no more than three to four times a year) are used by some physicians to ease symptoms, but the research on the benefits of doing this is mixed. “Our experience suggests that the injections provide relief of symptoms although often temporary. Injections into small joints, however, can be painful and have not been shown to prevent progression of erosions,” says Dr. Anandarajah.

Paraffin wax baths, moist heat, or other types of heat therapy can help ease inflammation and pain in erosive OA.

“Unfortunately, with erosive OA there is often more pain and more loss of function in the hands over time than with bread-and-butter OA. I recommend that patients see an occupational therapist who can help them maintain function and prevent further damage,” says Dr. Anandarajah.

Whether other therapies, such as disease-modifying antirheumatic drugs and biologics used to treat inflammatory arthritis, can help erosive OA is an active area of research.

While the inflammatory component in erosive OA raises the possibility of treatment with immunosuppressive medications and biologic agents, until recently there have been no large studies and some small ones haven’t shown much benefit, according to Dr. Anandarajah.

For example, European researchers reported in 2018 that patients with erosive OA did not get pain relief taking the tumor necrosis factor inhibitor etanercept (Enbrel), a biologic that helps other forms of inflammatory arthritis.

The results of trial on methotrexate was reported at the 2019 American College of Rheumatology Annual Meeting. The research showed that while MTX didn’t help much more with pain than a placebo, patients who received this commonly used DMARD had significantly less progression of joint damage during the year-long study.

Different researchers also reported on clusters of cases of erosive OA within families, which indicates that the condition has a strong genetic component. Ongoing testing of these families may help explain what goes wrong in erosive OA and point towards more specific treatment in the future.

“It has been frustrating that we haven’t come up with a specific treatment [for erosive OA], but the positive note is that 10 years ago we had to try to convince people that this condition exists and is important. Now that’s quite clear and there are many studies looking at treatment options. For example, we are studying biopsies of the little finger joints and hope that the findings will lead to specific medications,” says Dr. Anandarajah.