What Is Axial Spondyloarthritis? What to Know About This Inflammatory Back Pain

Axial spondyloarthritis is an umbrella term for different types of inflammatory arthritis that affect the spine and other joints. 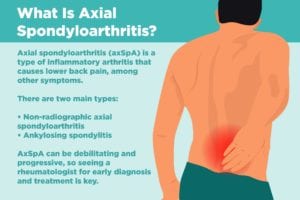 Around 5.5 million Americans have axial spondyloarthritis (axSpA), an inflammatory form of arthritis that is associated with chronic lower back pain. Axial spondyloarthritis is an umbrella term for types of inflammatory arthritis that primarily affect the spine and the sacroiliac (SI) joints that connect the lower spine to the pelvis, resulting in pain in the lower back, hips, and buttocks. There are two subtypes of axSpA:

“Non-radiographic” means that damage to the joints is not visible on X-ray. When changes to the vertebrae (the bones of the spine) or SI joints don’t show any changes on an X-ray, that’s known as nr-axSpA. Once the joints are clearly affected on an X-ray, a person can be diagnosed with AS.

Up to 6 percent of people with chronic back pain will ultimately receive a diagnosis of axial spondyloarthritis, but the disease often takes as long as 10 years to be diagnosed — a delay that can hugely impact your quality of life and lead to disability, missed time at work, and increased health care costs. Even worse, since the disease is progressive, you may become more debilitated over time. Left untreated, the vertebrae in your spine can fuse together.

Unfortunately, awareness of axial spondyloarthritis, including symptoms and what it takes to get diagnosed, is severely lacking. Here’s the scoop on this little-known disease.

“Our understanding of axial spondyloarthritis has really evolved in the last few years. We now understand that non-radiographic axial spondyloarthritis and ankylosing spondylitis are both in the same spectrum of disease,” explains Hillary Norton, MD, a rheumatologist in private practice in Santa Fe, New Mexico, who herself has AS. “The symptoms are the same, and the response to treatment is the same, but we don’t yet know who will progress to radiographic disease.”

Indeed, nr-axSpA may occur as early disease or may be a separate entity that never progresses to AS.

“While every AS patient, at some point, was non-radiographic, not everyone will progress to AS, particularly women,” says Dr. Norton. Read more here about how axial spondyloarthritis uniquely affects women.

Different studies have found rates of progression from nr-axSpA to AS of 5 percent to 30 percent over two to 30 years, reports Atul A. Deodhar, MD, professor of medicine and the medical director of rheumatology clinics at Oregon Health & Sciences University in Portland, Oregon.

Who Gets Axial Spondyloarthritis

AxSpA is a disease of the young: “It generally starts in people during their teens or in their twenties, or maybe in their thirties,” says Dr. Deodhar. “Almost always, the disease starts before age 40.”

Gender-wise, axSpA is now considered an equal-opportunity offender. “We used to think this was a disease of men, but we now know that when we look at axSpA as a whole, it’s probably equal between men and women,” says Dr. Norton.

Signs and Symptoms of Axial Spondyloarthritis

Inflammatory back pain in axial spondyloarthritis has some unique characteristics that, when taken together, can help doctors diagnose it. These include back pain that:

Other symptoms associated with axial spondyloarthritis may include:

“The impact on quality of life can be tremendous,” says Dr. Norton. “This is largely an invisible disease that rages at night and loss of sleep is a huge issue for quality of life. Absenteeism from work is a big problem as well.”

Doctors and researchers still have a lot to learn about the what causes axial spondyloarthritis. “It’s a combination autoimmune and inflammatory disease, meaning the innate and adaptive immune systems [the body’s first- and second-line defenses] are both involved,” explains Dr. Norton. While some risk factors can’t be changed, others can.

There is a genetic disposition to developing axSpA. The risk of developing it increases if a first-degree relative (a parent, sibling, or child) has it. HLA-B27, a genetic marker, is thought to be present in more than 90% of Caucasians with the disease. However, HLA-B27 is less prevalent among African Americans with axSpA. Read more about the role of HLA-B27 and axSpA.

Factors in your environment and other diseases you have may increase your risk of developing ankylosing spondylitis, but these aren’t very well understood. They include exposure to certain infections, toxins, and pollutants; injury to affected joints; changes in the bacteria in your colon; and bowel inflammation. More research is needed to understand how such factors influence the onset and severity of AS.

While some risk factors can’t be changed, others can. “Not smoking is important, since this can worsen the severity of the disease,” says Dr. Norton. Healthy lifestyle choices, such as exercising and eating a nutritious diet are also important while living with axSpA. Exercise is particularly critical because it can help relieve symptoms of inflammatory back pain and help people with axSpA maintain a flexible spine and joint mobility. Given the potential role that bacteria in the gut have on these inflammatory conditions, eating more pre- and probiotic foods like sauerkraut, yogurt, asparagus, and onions is recommended.

How Axial Spondyloarthritis Is Diagnosed

There’s no “gold standard” feature for diagnosing axSpA. It’s diagnosed through a combination of patient history, physical examination, blood tests (both for HLA-B27 and for markers of inflammation, such as C-reactive protein), and imaging tests, such as X-ray and MRI. Since it can take up to 10 years for X-rays to show damage from inflammation, clinicians tend to rely on MRI to help diagnose axSpA earlier. “The presence of the HLA-B27 genotype and MRI changes of active inflammation would clinch the diagnosis,” says Dr. Deodhar.

That said, two studies from 2019 show that the usefulness of MRI in the diagnostic process may be limited. This points out the importance of working closely with an experienced rheumatologist to help diagnose your condition and guide your therapy.

Back pain is so common in the general population that the diagnosis of axial spondyloarthritis may come down to having accompanying symptoms like eye inflammation, skin problems like psoriasis, or inflammatory bowel disease. Or maybe your back pain gets better with exercise and worse with rest. “All of these kinds of things make you think, ‘Hmm, this back pain is different,’” says Dr. Deodhar. “Physicians need to keep their antennae up.”

Here’s what to expect at the rheumatologist when getting diagnosed with axial spondyloarthritis or ankylosing spondylitis.

The Importance of Early Detection of Axial Spondyloarthritis

“Early diagnosis is important, as it can help prevent unnecessary procedures, and help patients to find a treatment regimen that works for them to help minimize symptoms and maintain function,” says Dr. Norton.

The early development of symptoms is one of the reasons for the delay in diagnosing the disease — generally people who develop back pain in their twenties aren’t aware that it could be from a chronic autoinflammatory disease, says Dr. Norton.

“When they do seek care, they may go to a chiropractor, a sports medicine physician, or a primary care physician, and may not get seen by a rheumatologist for quite some time.” And since inflammatory back pain differs from mechanical back pain (the type that’s caused by overdoing it at the gym or lifting something heavy) treating it the same way — often with limited rest and physical therapy — doesn’t help and can result in permanent damage. The ongoing inflammation from your immune system will continue to cause pain, and over time, possibly cause the vertebrae in your spine to fuse together.

While it’s easy to think that your back pain is due to a muscle sprain or herniated disc, it’s important to see a rheumatologist if your back pain has inflammatory characteristics.

The good news about axSpA is that it’s a hot topic in the field of rheumatology and new therapeutic options are in the pipeline and will be available in the near future.

Track Your axSpA Symptoms with ArthritisPower