Could Having Tonsillitis Increase Your Risk of Ankylosing Spondylitis? What a New Study Found

This adds to what we know about environmental risk factors for autoimmune-related diseases. 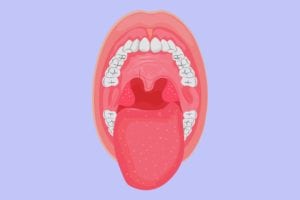 What does inflammation of your tonsils have to do with an inflammatory form of arthritis that impacts your lower back and other joints? According to a new study, people who’ve had tonsillitis are more apt to later develop ankylosing spondylitis (AS).

In the study, published in the journal PLOS One, researchers used data from a database in Taiwan and identified more than 37,000 people who were diagnosed with AS for the first time between 2005 and 2012. They then compared them to more than 222,000 people in the same database who did not have AS.

According to their findings, the AS patients were much more likely to have had tonsillitis. They were also more likely than control subjects to have had appendicitis and gum disease (periodontitis).

The underlying connection probably stems from inflammation, but there may be other factors as well. Some experts believe that the tonsils play a role in the immune system, so it’s possible that someone who develops tonsillitis already has (or is developing) a more widespread immune problem. The authors also note that any infection, including tonsillitis, may somehow trigger an abnormal immune response.

It’s also possible that antibiotic medications used to treat tonsillitis alter the balance of bacteria and other microbes in the gut in a way that makes an autoimmune ailment like AS more likely to develop.

As the authors point out, this study does not mean that tonsillitis actually causes AS.

“These findings indicate that tonsillitis may trigger a gradual exacerbation of inflammation among patients with AS,” they wrote. “More studies are warranted to explore the underlying mechanisms linking tonsillitis with AS and to investigate the roles of tonsillitis in other autoimmune diseases.”