Knowing the factors that contribute to AS risk can help you watch out for them and possibly accelerate your diagnosis and treatment. 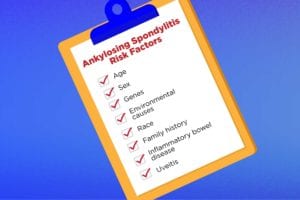 Ankylosing spondylitis is a chronic type of arthritis that causes inflammation, pain, and stiffness, most often in the spine and the sacroiliac joints located just above the tailbone. Unlike osteoarthritis, AS isn’t a result of natural wear and tear on the joints. It develops because of chronic inflammation in the body. Inflammation means that your body’s immune system is releasing chemicals into your blood and joints that cause pain and stiffness.

Over the last few decades, doctors and researchers have learned a lot more about ankylosing spondylitis symptoms and how inflammatory back pain of AS presents differently from mechanical back pain (like a muscle strain or overuse injury). But we still don’t know a lot about what causes AS or what increases your risk of developing AS.

Here is what we do know about AS causes and risk factors.

Ankylosing spondylitis most often affects young adults. Although degenerative arthritis tends to be associated with aging, inflammatory back pain first occurs at younger ages. About 80 percent of AS patients will experience their first symptoms before age 30; just 5 percent will notice AS signs at 45 or older, according to the Johns Hopkins Arthritis Center.

“Ankylosing spondylitis most commonly presents in the teens, twenties, and thirties,” says Eric M. Ruderman, MD, professor of medicine/rheumatology at Northwestern University’s Feinberg School of Medicine in Chicago. “In fact, under age 45 is a commonly accepted diagnostic criteria, as back symptoms from ankylosing spondylitis rarely start for the first time after that age.”

Take our inflammatory back pain quiz to see if your symptoms could be due to ankylosing spondylitis.

AS used to be considered a “man’s disease” because the disease was overwhelmingly diagnosed in men compared with women.

When you consider both AS and non-radiographic axial spondyloarthritis, the disease occurs fairly equally in men and women, says Dr. Ruderman.

However, AS (radiographic or not) may still be underdiagnosed in women. Women tend to be diagnosed later than men and may experience more misdiagnoses along their patient journey.

Certain genes play a role in the development of ankylosing spondylitis. The most well-known is the HLA-B gene, which is part of a family of genes called the human leukocyte (HLA) complex. The HLA complex helps the immune system differentiate between the body’s own proteins and those made by invaders like bacteria or viruses.

The HLA-B gene has hundreds of variations, each differentiated by number. One variation, HLA-B27, has a strong connection to the development of ankylosing spondylitis. If you have the HLA-B27 gene variation, you’re more likely to develop AS. But there are two important caveats:

1) You can have AS without being positive for HLA-B27. African Americans with AS are less likely to have HLA-B27 than Caucasians, for example, but they still develop AS.

2) Having the HLA-B27 gene doesn’t guarantee that you will get AS. While many people carry the HLA-B27 gene (about 8 percent of Caucasians in the United States do), not everyone with HLA-B27 will develop AS.

Variations in several additional genes, including ERAP1, IL1A, and IL23R, have also been associated with ankylosing spondylitis, according to the Genetics Home Reference in the U.S. National Library of Medicine.

AS is complex disease that’s not caused only by one gene, but a complex mix of genetic, environmental, and other risk factors.

Environmental factors may increase your risk of developing ankylosing spondylitis, but these aren’t very well understood. They include exposure to certain infections, toxins, and pollutants; injury to affected joints; changes in the bacteria in your colon; and bowel inflammation. More research is needed to understand how such factors influence the onset and severity of AS.

However, while African Americans may be less likely to develop AS, research shows that those with AS have worse disease activity and functional impairment. (Watch AS patient Roz’s story about getting misdiagnosed for years.)

Inflammation of the gastrointestinal tract is common in ankylosing spondylitis. Having one disease raises your risk of developing the other.

Researchers are continuing to explore possible underlying mechanisms between IBD and AS. One possibility may be that changes in the gut microbiome (the bacteria that live in your digestive tract) influence inflammation that triggers both diseases.

If you’ve had an episode of uveitis, a type of eye inflammation, you may be at a greater risk of developing ankylosing spondylitis, says Maureen Dubreuil, MD, assistant professor of rheumatology at Boston University School of Medicine.

Getting Diagnosed with AS

If you suspect your back pain or other symptoms could be AS, and you have some AS risk factors (or even if you don’t), see your health care provider and ask for a referral to a rheumatologist. “Early treatment of ankylosing spondylitis can result in less spine damage and better function later in life,” says says Brett Smith, DO, a rheumatologist with Blount Memorial Physicians Group in Alcoa, Tennessee. Read more about how AS is diagnosed and what to expect at your first doctor visit to evaluate AS.