If You Feel Frustrated With Your Healthy Living Goals, This Fibromyalgia Patient’s Mantra Is the Inspirational Message You Need Right Now

When we found this glass-half-full message on Rachel Gerson’s Instagram (@painfreekitchen), we knew had to share it. Gerson, 32, who lives in Chicago, was diagnosed with fibromyalgia seven years ago; her symptoms started a year earlier after a water skiing...

Did you “fall off the wagon” this weekend? Did you skip your workouts? Eat gluten when you told yourself that you wanted to be #glutenfree? Fail?? Well guess what. Me too. That’s right. After finally breaking through my weight loss plateau, I had one week of skipping cardio and eating out at restaurants…and my weight went right back up. But that also makes me human. Unless I’m on prep, I have weeks where I don’t make the best choices. But that doesn’t mean I “failed.” Because each time I learn a little more about myself. And use that knowledge to do better next time. If this weekend you made less than healthy choices, journal to figure out why. Was it FOMO? Was it because you put too much pressure on yourself the week before and you’re burnt out? Was it because you’re hurting inside and needed to comfort yourself? Finding that why is invaluable. No guilt. No shame. You just learned a little bit more about what works for you 💕

When we found this glass-half-full message on Rachel Gerson’s Instagram (@painfreekitchen), we knew had to share it.

Gerson, 32, who lives in Chicago, was diagnosed with fibromyalgia seven years ago; her symptoms started a year earlier after a water skiing accident. (These are common fibro symptoms you might be ignoring.)

The Thomas Edison quote, Gerson’s favorite, is about learning from our mistakes, says Gerson, who graduated this past year with a master’s degree in exercise science. Her thesis was on using exercise to control fibromyalgia symptoms.

“If you wanted to start an exercise program but skipped your workouts all week, ask yourself why?” Gerson says. “Maybe it’s because you tried to go at 5 a.m. but you need sleep more. Maybe it’s because you don’t actually enjoy running and should try biking instead. Maybe you need outside motivation and need to do a workout class or have a workout partner instead. Instead of thinking you ‘failed,’ think of a change you can make and try it again,” Gerson says.

She’s struggled with her own failures along her path to try to live a fit, healthy lifestyle while addressing her fibro symptoms. “I’ve had so many failures, but one sticks out in particular,” Gerson recalls. Years ago, she wanted to try an elimination diet to see if it would help control her fibromyalgia symptoms. (Here’s more info about diet changes that can help treat fibromyalgia.)

“I tried a 30-day elimination diet. But after two weeks I threw in the towel,” she says. “I thought the diet was too hard! I remember distinctly that I ate a sandwich, cookie, and diet Coke, which were all not allowed. But I just wanted to ‘be normal.’ I even wrote a blog post about how terrible the diet was and how it would never work for treating my fibromyalgia.” 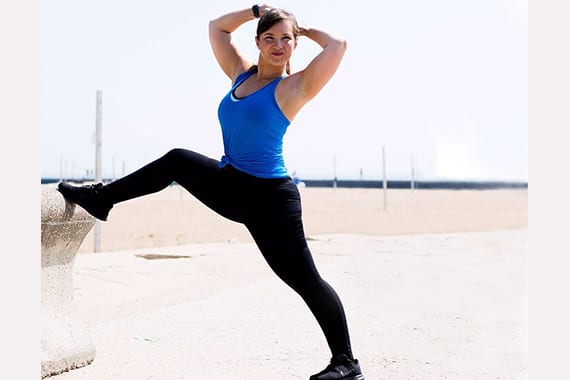 A few months later, though, Gerson decided to give it another go.

“This time I was 100 percent committed because I was willing to try anything for my pain to go away. I finished all 30 days and by the end did notice my pain was a little less,” says Gerson. Afterward, I tried to reintroduce gluten and immediately had a major flare! That’s when I knew it had worked.”

Gerson’s main lesson learned: how important it is to have a “why” powerful enough and keep it top of mind. “Whenever you feel like quitting, whether it’s a new diet, exercise routine, or really anything, remember the reason behind why you’re doing it,” she says.

We also asked Gerson her best piece of advice for anyone just diagnosed with fibromyalgia, or anyone really struggling to manage it.

“Find strength by connecting with others online who are also diagnosed,” she says, noting that living with a chronic illness can be very lonely, so finding others that understand what you’re going through is very helpful. Gerson prefers connecting on Instagram and Twitter – specifically with people who keep a positive outlook.

“Surrounding myself with positivity helped keep me positive, especially on days that were particularly hard,” she says.