Fibromyalgia Tender Points: What and Where Are They?

And does counting tender points in fibromyalgia even still matter? 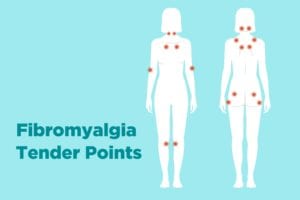 What Are Fibromyalgia Tender Points?

“One of the things that’s true in people that have fibromyalgia is that they have a reduced threshold to pain,” says Frederick Wolfe, MD, a rheumatologist and fibromyalgia expert in Wichita, Kansas, who helped create the original and updated fibromyalgia diagnostic criteria from the American College of Rheumatology. Someone without fibromyalgia could be gently bumped into and barely notice it. But because someone with fibromyalgia is more sensitive to pain, that same degree of touch could hurt a lot more.

Although fibromyalgia is a condition known for causing widespread pain, doctors used to identify specific areas of the body — called tender points — that felt more sensitive to touch to fibromyalgia patients than to someone who doesn’t have this disorder.

Tender points are specific areas of pain that are near your joints but are not the joints themselves. They hurt when you press on them. Even pressure from a finger — like a poke — can make someone wince or flinch.

“The term ‘tender points’ came about in 1977 when two Canadian physicians, Hugh Smythe and Harvey Moldofsky, proposed criteria for fibromyalgia based on the identification of these tender spots,” says Dr. Wolfe. “It seemed reasonable and found its way to be the prime diagnostic component of the 1990 fibromyalgia criteria from ACR.”

These tender points aren’t located randomly. They are in specific certain areas of the body and are small — about the size of a penny. They help to differentiate between otherwise healthy people and people with fibromyalgia, says Dr. Wolfe.

When doctors would diagnose fibromyalgia years ago, they would count tender points that caused pain in the patient. If 11 out of 18 tender points tested positive for sensitivity, this would help them make a diagnosis of fibromyalgia.

Where Are Fibromyalgia Tender Points?

Fibromyalgia tender points tend to be symmetrical in the body. They are located both above and below the waist around the neck, chest, shoulders, hips, and knees. The tender point should cause pain in that exact area when the doctor presses on it with enough force to turn their fingernail white. It should be painful in the exact spot that is being pressed.

The 18 tender points for fibromyalgia include:

Although experts don’t know exactly what is causing these sensitivities in specific areas, it has to do with muscle spasms, says John Dombrowski, MD, anesthesiologist and pain management at The Washington Pain Center, Washington, D.C.

“When muscles get spasms [involuntary contractions], they tend to have a lack of oxygen and blood. That lack of oxygen and buildup of acid and carbon dioxide causes more pain in the muscles, which causes greater spasms, and it’s a vicious cycle.” Why do muscles have spasms in the first place? “We still don’t know the reason for these spasms and increased sensitivities,” he says. “But what’s causing the pain is a cyclical event.”

Why Are Tender Points No Longer Counted Today?

Fibromyalgia is a challenging disorder to diagnose because doctors can’t see patient’s symptoms on the body or in blood tests or X-rays. Diagnosing fibromyalgia comes down to a physician — often a rheumatologist — listening to a patient’s history and symptoms, including their severity and duration.

The American College of Rheumatology included counting tender points in their 1990 Fibromyalgia Diagnostic Criteria, establishing that 11 of the 18 tender points had to be present and cause pain for at least three months.

Read more about how fibromyalgia is diagnosed today.

“When we first latched onto those tender points, we thought they were more than they turned out to be,” says Dr. Wolfe. “[Counting them properly] can be difficult to do and they aren’t reliable amongst experts. It requires pressing with a certain force and some doctors use more force than other doctors. Counting tender points turned out to not be very useful diagnostically.”

“The problem with tender points is that they are very subjective,” says Dr. Dombrowski. “The way that I apply pressure to a patient may be different from another physician.”

Another factor is that fibromyalgia pain can fluctuate in location and intensity from day to day. One day, a fibro patient could have severe pain in nearly all tender points. Another day, they might have pain in only a few.

Doctors realized that over-relying on tender points to make a fibromyalgia diagnosis was leading to too many patients being under-diagnosed.

The earlier criteria that emphasized tender points also ignored the other chronic symptoms many fibromyalgia patients experience, including sleep difficulties, fatigue, not feeling refreshed in the morning after sleeping, and cognitive issues like “fibro fog.”

By 2016, the ACR modified their most recent guidelines for diagnosing fibromyalgia that factored in the Widespread Pain Index (WPI), which assesses where you felt pain in specific areas of the body, counting a “1” for each area. The Symptom Severity Scale (SSS) score assesses how the pain feels in terms of fatigue, cognitive symptoms, and how they feel when they wake up, on a scale of 0 (no problems) to 3 (severe and continuous).

The latest criteria for diagnosing fibromyalgia involves these factors:

Some of the changes made between the 2011 diagnostic criteria and the ones used today are that the “pain areas” that are counted are the left upper body, right upper body, left lower body, right lower body, and the center of the body (usually low back). Now the jaw area, abdominal area, and chest pains are not evaluated as part of the criteria.

You can fibro at the same time as other diseases.

What Is the Treatment for Tender Points?

Treating tender points involves treating your fibromyalgia condition as a whole and may involve several prescriptions and recommendations for lifestyle modifications.

Physicians may recommend the following types of medication to help with fibromyalgia symptoms and tender point pain:

Within these classes, some medications are approved specifically for fibromyalgia: duloxetine (Cymbalta®), milnacipran (Savella™), and pregabalin (Lyrica®).

“If there’s one specific muscle group that is more painful than another, then that’s where an injection would play a role,” says Dr. Dombrowski. He says he might use a local anesthetic and a small amount of cortisone to the affected area. “If the muscle continues to be in spasm and doesn’t respond to exercise and stretching, you could actually use Botox to keep the muscle paralyzed.” A pain management specialist may recommend a trigger-point injection or myofascial injection with a local anesthetic and steroids, says Dr. Dombrowski.

As well, lifestyle modifications are critically important in managing fibromyalgia symptoms, especially exercise. Exercise can help address many issues related to fibromyalgia, including anxiety and depression, pain, and fatigue.

“Getting regular aerobic exercise and doing muscle strengthening can help,” suggests Dr. Wolfe. “Controlling stressors is a very important thing. Because we know that stress is an important determinant in some people with fibromyalgia.”