Obesity Dramatically Raises the Risk of Knee Osteoarthritis, for These 2 Main Reasons

The combination of high body fat and low muscle mass is especially risky for knee OA. 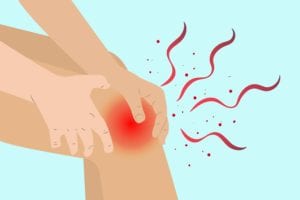 Experts have long known that people who are obese have a higher risk of developing osteoarthritis (OA) in their knees. That’s not terribly surprising, considering that every time you take a step a force equal to 1.5 times your total body weight gets placed on these joints.

Most doctors determine whether someone is normal weight, overweight, or obese based on their body mass index (BMI), and it’s not a perfect measure. BMI only factors in height and weight; muscle weighs more than fat.

That means someone who is very muscular, such as an athlete, might very well have a BMI that falls in the obese category despite being very lean. Similarly, someone with an excess amount of body fat could have a BMI that’s considered normal or even underweight if their muscle mass is very low.

Meanwhile, a growing number of people are believed to have too much body fat as well as low muscle mass, a combination that’s known as sarcopenic obesity. It usually goes hand in hand with aging and excess inflammation.

At baseline, none of the participants had knee OA, but by the 60-month follow-up visit, 315 people had developed it (as confirmed by imaging tests that showed damage to the knee joint).

When the scientists analyzed their findings, which were published in the journal Arthritis & Rheumatology, they found that women who were categorized as obese or sarcopenic obese were twice as likely to have developed OA compared to women with normal amounts of fat and muscle.

Men were more than 70 percent likely to have developed OA over their “normal” peers if they were obese. (Being sarcopenic obese also raised men’s risk but the increase was not statistically significant.)

“Our results suggest that the risk of knee OA in both women and men is primarily conferred by adiposity, with perhaps a lesser independent effect of muscle mass,” the authors wrote.

Not only does excess fat take a physical toll on the joints, but fat cells also release inflammatory substances called adipokines, and “the role of adipokines has been demonstrated in knee OA,” the authors added.

“Weight loss strategies for knee OA should focus on obesity and sarcopenic obesity,” they concluded.

My Arthritis and Fibromyalgia Made Me Dread Showering, So Here’s What I Did About It