8 Gout Complications You Need to Know About

Gout affects more than your joints. Here are facts about common gout comorbidities and how to prevent and manage them. 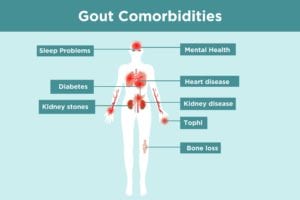 Gout is a painful and acute onset of arthritis caused by the buildup of uric acid (a normal waste product in your body) in the blood. When uric acid is elevated in the blood, it can accumulate in your joints and trigger an inflammatory response that causes severe pain and swelling. Gout often affects one joint at a time (the big toe is a common place for gout to start), but over time it can affect many joints as well as other parts of the body, especially when it is not properly treated.

With gout, you’ll have swelling, redness, warmth, and tenderness to the touch in your joints, says Konstantinos Loupasakis, MD, a rheumatologist at MedStar Washington Hospital Center in Washington, DC. During gout flares, pain can be so excruciating that you can’t even tolerate bedsheets touching that joint.

“When you have an acute gout flare up, you can’t move,” says Puja Khanna, MD, associate professor in the division of rheumatology, department of internal medicine at University of Michigan in Ann Arbor. Gout is her area of practice. “Uric acid is sitting in your joints, causing chronic inflammation. Your joints are getting more and more disabled.”

After treatment with steroids like prednisone and NSAIDs, pain will usually subside within a few days. Repeat gout flares can lead to chronic joint damage, where bones get eroded and the joint space narrows. “Chronic complications happen after repetitive untreated attacks,” Dr. Loupasakis says. “You can permanently damage your range of motion. We want to prevent this from happening. It’s harder to treat when we reach this point of damage.”

Dr. Khanna says that some patients think they can go to their primary care physician and get treatment for a gout flare. They’re not told that gout is a chronic condition like diabetes, high cholesterol, or hypertension, she says. “I make them aware that gout is chronic. And if you have a chronic condition, you treat it,” she says. “If they aren’t aware it’s chronic, then they think they can pop an ibuprofen and that’s it.”

Proper treatment of gout is crucial. In addition to treating an acute gout attack, preventively lowering uric acid levels with medication can prevent gout flares and the long-term complications that go with them. Medications called xanthine oxidase inhibitors limit the amount of uric acid your body produces. These include allopurinol (Zyloprim and Aloprim) and febuxostat (Uloric). Another class of drugs called uricosurics help your kidneys remove uric acid from the body. These include probenecid (Probalan) and lesinurad (Zurampic). An infused drug called pegloticase (Krystexxa) can help the body eliminate uric acid in people whose gout hasn’t been well controlled with other medication.

Properly treating gout with medication, as well as with lifestyle changes, can help prevent a host of gout-related complications, also known as comorbidities. It’s important to understand all the possible gout comorbidities and complications. Once you read through this list of gout complications, bring up any questions or concerns you have with your doctor. You may need to create a health care team of different specialists, such as seeing a rheumatologist and a nephrologist — or facilitate better communication between them to ensure you’re getting optimal care for your gout and its comorbidities.

Tophi develop in up to about one-third of people who have gout. Tophi are clumps of urate crystals and inflammatory cells that form under the skin when you have gout. They are more likely to occur in people with gout for a longer period of time or whose gout is not well-controlled. Gout tophi can occur in the hands, feet, wrists, ankles, eyes, ears, nose, and even heart valves.

Gout tophi feel like hard bumps beneath the skin. “They can be painful due to their size, like walking on a marble. But they can also be painless,” says John Fitzgerald, MD, a rheumatologist who practices in Los Angeles and Santa Monica, California and whose research focuses on gout.

Gout tophi aren’t just an aesthetic problem. As tophi grow, they can erode the joints and surrounding skin and tissue, causing damage and eventual joint destruction. “They can start to get bigger and burst open through the skin,” says Dr. Khanna. Tophi are also prone to infections that require antibiotics. If gout tophi get infected or too large, they need to be surgically removed.

Keeping uric acid levels at a healthy level is the best way to prevent gout tophi. “By treating the hyperuricemia [excess of uric acid in the blood], you prevent crystal growth/deposition. Lowering uric acid can make the tophi crystals dissolve,” says Dr. Fitzgerald.

Kidney stones are one of the most common gout complications. They affect about one in five people with gout. If urate crystals collect and build in your urinary tract, they can form kidney stones. Symptoms of kidney stones include:

“The pain in the back and into the groin may be extremely severe,” says Daniel Furst, MD, a UCLA and University of Florence rheumatology professor who practices in Los Angeles and Seattle. “Women compare it to the pain of childbirth.” For people with a history of kidney stones, doctors usually recommend passing about 2.5 liters of urine a day. Your doctor may ask that you measure your urine output to make sure that you’re drinking enough water.

To prevent uric acid stones from gout, doctors commonly prescribe the uric acid-lowering medication allopurinol. “It reduces production of urate and thus reduces the amount of urate both in the joints and in the urine,” says Theodore R. Fields, MD, FACP, rheumatologist at Hospital for Special Surgery in New York City. In some cases, allopurinol and an alkalizing agent may dissolve the uric acid stones. To help prevent calcium stones from forming, your doctor may prescribe a thiazide diuretic or a phosphate-containing preparation.

Initial symptoms of kidney disease include tiredness, weakness, and decreased energy, says Dr. Furst. However, the kidneys are amazing in their ability to compensate for problems in their function so chronic kidney disease may progress without symptoms for a long time. When decrease in kidney function is severe, people can have symptoms like ankle swelling, nausea, fatigue, and loss of appetite.

That’s why ongoing monitoring of kidney function in gout patients is so important. “It’s important to pick up changes in kidney function early in gout, so that efforts can be made to preserve remaining function, such as by controlling blood pressure,” says Dr. Fields. “Gout medications may need dosage adjustment if kidney function changes.”

Gout and cardiovascular disease commonly occur together. In a study published in the Journal of the American Heart Association, researchers from Duke University studied data from more than 17,000 patients, including 1,406 who had gout at the start of the study and were being treated for cardiovascular risk factors. After following patients for an average of 6.4 years, researchers found that the risk of dying of cardiovascular disease or having a heart attack or stroke was 15 percent higher among those with gout than in patients who never developed gout. Patients who had gout at any point during the study had a two-fold increased risk of heart failure death compared to people who never developed gout.

Gout causes inflammation in the joints and the rest of the body; inflammation is also a risk factor for heart disease. Heart disease prevention strategies include maintaining a heart-healthy diet, regular exercise, and better cardiovascular risk assessment. Your doctor may recommend more frequent screening tests or more aggressive management of other heart disease risk factors that also occur with gout, such as high blood pressure.

A study published in the journal the Annals of the Rheumatic Disease found that gout may be independently associated with an increased risk of type 2 diabetes. Scientists aren’t exactly sure why gout and diabetes are related, though inflammation may be a common factor. If you’re overweight or obese, you’re more likely to have both gout and type 2 diabetes. Excessive alcohol consumption can also contribute to both gout and diabetes.

Since gout attacks often happen at night, people with gout are awoken from sleeping. Pain from gout can prevent you from falling back to sleep. That sleep deprivation can lead to increased stress, mood swings, fatigue, and other health problems. In a survey of gout patients published in the journal Arthritis Research & Therapy, nearly a quarter of respondents described frequent sleep disorders and daytime sleepiness.

Symptoms of sleep apnea include daytime sleepiness, fatigue, snoring, difficulty concentrating, restlessness during sleep, and gasping for air while sleeping. People with sleep apnea experience many small interruptions in breathing while they sleep, and this lowers the level of oxygen in their blood. This is thought to affect a process that elevates the production of uric acid in the body, which raises gout risk.

The chronic pain associated with repeated gout attacks can lead to stress, anxiety, and depression. Gout can cause severe pain that can make it tough for you to get around, go to work, and complete daily tasks. That impact on your daily life can impacts patients’ mental, social, and physical well-being.

“It’s not just about functionality and disability, but also how patients view themselves,” says Dr. Khanna. “I talk to patients about the fact that gout is treatable, and it’s possible to stay completely flare-free if they take their medications.”

When you have gout, you’re more prone to osteopenia and osteoporosis factures. A study in the journal Medicine found that the overall rate of bone fracture in people with gout was nearly 23 percent, which was higher than that of those without gout.

In the early phases of thinning bones, called osteopenia, and even in more advanced osteoporosis, people don’t have symptoms unless they develop a bone fracture. “That’s why it’s important for women at the time of menopause and men with gout or other osteoporosis risk factors at least by age 65 to get a bone density test,” says Dr. Fields. “This will detect bone thinning and lead to treatment.”

If you have gout and other osteoporosis risk factors, ask your doctor about when you should start screening for bone mineral density. If you’re found to have thinning bones, you may be prescribed medications to prevent further bone loss, such as bisphosphonates. These include alendronate (Fosamax), risedronate (Actonel), bandronate (Boniva), and zoledronic acid (Reclast).

27 Things You Understand Only If You Live with Chronic Pain

Does COVID-19 Affect the Eyes? What to Know About Pink Eye and Other Symptoms