Other safer and more effective treatments are available to treat the pain from gout attacks. 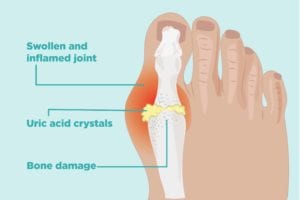 When gout, a type of inflammatory arthritis, flares up, the pain can be awful. Many patients say that simply having a bed sheet brush against an inflamed joint is excruciating. While it’s clear why a gout attack would lead many people to the emergency room in search of prompt relief, a new study suggests that many of gout patients aren’t being treated properly there.

According to the study, which was published in the journal Arthritis Care & Research, more than 28 percent of gout patients who were discharged from a hospital or ER between 2015 and 2017 left with a prescription for opioid pain medication. These findings were based on data from medical records of 456 patients.

While opioids often work well for severe pain, they do not help to reduce inflammation associated with a gout flare. Opioids also come with several possibly serious side effects, including confusion, dizziness, constipation, and addiction. These risks are more likely with long-term use, and this study found that 25 percent of the patients who left the hospital with an opioid prescription were given enough of the drug to last at least 14 days (which is longer than a gout attack typically lasts).

More appropriate treatments for a gout flare include steroids, NSAIDs (non-steroidal anti-inflammatory drugs, such as ibuprofen), and a drug called colchicine. These options are “very effective for reducing the inflammation and pain associated with the attack,” the authors wrote. “Prior studies suggest that both non-steroidal anti-inflammatory drugs and steroids could reduce the pain and disability associated with gout within the first six to 18 hours of treatment.”

“Our study suggests a high use of prescription opioids in patients discharged from the [emergency department] with a diagnosis of gout, a condition which can be managed effectively with other medications. In addition to regulatory changes, the burden of opioid prescription could be potentially reduced by creating prompts for providers in electronic record systems to avoid prescribing opioids in opioid-naïve patients, or using lower intensity and shorter duration of prescription,” the authors concluded.